The Offload: Brett Gosper must be held to account for what he says

Jack McGrath is seemingly Ulster bound next season, and it could open the floodgates 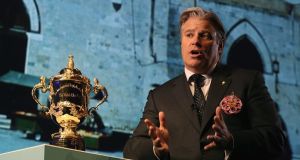 Brett Gosper has promised the Pacific Islanders would not be “shut out” of any World League creation. Photograph: David Rogers/Getty Images

This time, Brett Gosper must be held to account for what he says. In May 2016 the chief executive emerged from a World Rugby council meeting in Dublin with a shoulder shrugging dismissal of extending the three year residency rule.

In what looked an excruciatingly embarrassing situation, WR vice chairman Agustín Pichot followed Gosper out of the same room to utter the opposite opinion. “The current view of the members of the unions is to keep it at three years,” Gosper announced. “We are not going to stop looking at that but right now in the current climate we believe it is the right level.”

Although neither man is in need of a vitamin D boost, both were caught cold by the pervading mood in the current climate. This odd couple scrambled for high ground by promising the Pacific Islanders would not be “shut out.”

Should we believe them? A recent history lesson teaches us to be extremely sceptical. The USA is every sport’s dream market. The Americans now unlikely promotion, ahead of Fiji, might even bring rugby closer to becoming a global game, rather than its current colonial parameters, but if it is achieved with “our pacific islanders against your pacific islanders,” as Daniel Leo fears, a recent example being Bundee Aki squaring up to Manu Tuilagi, then rugby has truly sold its soul.

By the numbers: 5 - Number of consecutive weekends Ireland may have to play in November/December in World League

McGrath’s is the right move

Seemingly Ulster bound next season, Jack McGrath is a British and Irish Lion. That 2017 tour of New Zealand did wonders to rejuvenate Cian Healy’s career, as he got the jump on McGrath with a full Leinster preseason. Ed Byrne would be a starting loosehead at most English and French clubs. Peter Dooley was ridiculously above the level playing for Lansdowne in last year’s AIL final.

“What I don’t want to see is forced migration,” said Leinster chief executive Mick Dawson. “It’s a risk and it’s something we don’t want to see. I’m not saying it’s happening, but I think it would be a terrible pity if the provinces lost their identity and fellas were moving for money all the time.”

Dawson dampened the explosiveness of his “forced migration” comment but something is certainly happening. Something long overdue, with McGrath and those who follow him north, south or west to benefit individually. It also makes Irish rugby stronger.

Leinster’s next challenge is to prioritise talent. Somebody needs to become a blindside.

Quote of the week: “Avalanche of media on World League in last 24 hours. Many inaccuracies. World Rugby has pushed for relegation/promotion which is not universally supported. The two extra tier two teams funded to enter the Rugby Championship will be selected on merit – so no Pacific shut out!”

Live sessions need to be offline

Staying in touch with the game, we see players stunned out of their own senses and surroundings being guided from the field every week. Ex-players tell harrowing stories about what happens behind closed doors. Current players inside this increasingly dangerous bubble, understandably, keep shtum.

Sam Warburton was forced to retire age 29 with two successful Lions captaincies and one unfortunate decision by Alain Rolland away from a World Cup final appearance. Warburton’s broken body – seven surgeries and four diagnosed concussions – pale in comparison to his undiagnosed wounds.

“I had a nine season playing career by which three and a half were injured,” he told BT Sport. “The first few years of my career I remember getting up from collisions in the Millennium stadium, which is a bowl, so you can’t figure out which way you are playing. Playing against England I had to figure out who is wearing the white shirts, who is wearing red. ‘Right, I’m playing this way.’ That happened a lot.”

Warburton sees an immediate way to reduce concussions: “Some teams are guilty of doing two, sometimes three live sessions ever week and that on top of a game. We really need a rule of 10 minutes max of contact in the week. We need to bring the level of contact down.”

Not to be comparing, but the NFL have clearly defined contact rules at practice since 2011 (with six figure fines). Rugby remains unregulated.