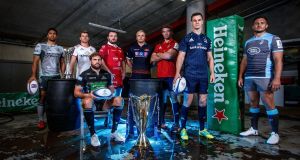 Coach: Leo Cullen.
Last season: Champions.
How they qualified: EC champions and Pro14 champions. Top tier.
Recruitment: Joe Tommane (Montpellier) is the main signing, and there have been more promotions from within. Jamie Heaslip, Isa Nacewa and Richardt Strauss have retired, while Joey Carbery and Jordi Murphy were relocated.
Key man: Johnny Sexton. Best outhalf in Europe and now even more influential as captain.
This season’s formguide: W L W W W.
Prospects: Have lost proven campaigners, and have to replicate the same hunger after completing last season’s historic double – hardly unrepeatable. They have a tough pool, but have the all-court, all-weather game to do so and be contenders again. Pool winners.

Coach: Dai Young
Last season: Pool exit.
How they Qualified: Third in Premiership.
Recruitment: All Blacks outhalf Lima Sopoaga was the marquee signing from the Highlanders to replace Danny Cipriani. James Haskell also moved on.
Key man: Sopoaga. Smooth distributor and goal-kicker, whom Wasps employ further out in strike moves.
This season’s formguide: W L W W W.
Prospects: Third again domestically after 42-31 defeat at home to Exeter in round three. But three wins out of three away suggests they’re fixing some of last season’s flaws (they lost all three in Europe). Potent attacking game could make them Leinster’s  most dangerous rivals. Pool runners-up.

Coach: Todd Blackadder.
Last season: Pool exit.
How they qualified: 6th in Premiership.
Recruitments:  London Irish winger Joe Cokanasiga looks a like-for-like signing for Matt Banahan, gone to Gloucester. Jamie Roberts has also joined.
Key man: Sam Underhill. The 22-year-old made a huge impression last season, despite being restricted to just eight games for Bath and two for England last season, primarily due to concussion issues. A modern-day, physical back-rower.
This season’s formguide: L D W W L
Prospects: With Anthony Watson and Jonathan Joseph injured, Bath have been slow out of the blocks. Were under-strength for week’s 50-27 defeat away to Saracens – could be a recurring theme. Back-to-back games against Leinster look pivotal.

Coach: Christophe Urios.
Last season: Third in pool/12 points.
How they qualified: Champions of France.
Recruitments: Ex-Clermont fullback Scott Spedding and Toulouse centre Yann David from Toulouse have been added to settled squad.
Key man: Mathieu Babillot. The ball-carrying 24-year-old assumed captaincy from Rodrigo Capo-Ortega whenever he was rested and broke into the French team, impressing on NZ tour.
This season’s formguide: W W L W L W.
Prospects: Won the Bouclier with 10th highest budget (at €23.7million, this is relative), and won seasonal opener at Montpellier, and last week in Toulouse, from 22-3 down, to stand fourth. But domestic priorities have led to 13 pool exits in 14 campaigns.

Coach: Rob Baxter.
Last season: Pool exit after three wins from six.
How they qualified: 1st in Premiership and beaten finalists.
Recruitments: Alex Cuthbert is the only signing to a settled squad, with Thomas Waldron heading back to NZ.
Key man: Don Armand, their captain and big-tackling, ball-winning, ball-carrying standard-bearer in a cast of back-rowers which, alas, is now without Sam Simmonds for the season due to his ACL injury.
This season’s formguide: W W W W W.
Prospects: Like Sarries, they have continued where they left off last season. The Stranglers in opposition 22, where they just grind teams down with their maul or pick-and-jam. A machine, and due a good Euro run. Pool runners-up.

Coach: Johann van Graan.
Last season: Semi-finalists.
How they qualified: Pro14 semi-finalists.
Recruitments: Joey Carbery, Tadhg Beirne, Mike Haley, Arno Botha and Alby Mathewson all look good business, albeit Simon Zebo is a huge loss.
Key man: Joey Carbery. One suspects Munster’s season hinges largely on how well he adapts to them, and they to him.
This season’s formguide: W L W L W.
Prospects: Hmmm. Many of the old basic performance levels and virtues remain, and they have the most revered home venue in Europe. Exeter look ominous foes, but Munster have an exceptional Euro DNA, and all roads lead to Limerick on the final Saturday at teatime. Pool winners.

Coach: Johan Ackermann.
Last season: Didn’t qualify.
How they qualified: 7th in Premiership and Challenge Cup finalists.
Recruitments: Look the better for the arrival of Danny Cipriani, Matt Banahan, Jaco Kriel and Gerbrandt Grobler.
Key man: Danny Cipriani. Has certainly lit up Kingsholm and the English press box – if not Eddie Jones, thus making him a cause celebre – with his inventive passing.
This season’s formguide: W D W L L.
Prospects: Should be improved on last season, but it would be a surprise if the Cherry & Whites were knockout contenders in either competition. Back-to-back meetings with the Chiefs liable to dilute their interest.

Coach: Mark McCall.
Last season: Quarter-finals.
How they qualified: Premiership champions.
Recruitments: The 35-year-old David Strettle has returned from Clermont, while Chris Wyles and Schalk Brits have retired. Settled squad.
Key man: Owen Farrell. A superb goal-kicker and director at outhalf, he also
appreciates space like few others and now has an extraordinary CV. And, of course, a young enforcer in Maro Itoje.
This season’s formguide: W W W W W.
Prospects: The dethroned Euro champions and English champions have begun season ominously with five bonus-point wins out of five, and have now scored four tries or more in 11 consecutive Premiership wins. Pool winners and major contenders.

Coach: Dave Rennie.
Last season: Pool exit, one win out of six.
How they qualified: Conference A winners/semi-finalists.
Recruitments: Australian scrumhalf Nick Frisby has arrived in place of Edinburgh recruit Henry Pyrgos, and DTH van der Merwe will add tries.
Key man: The departure of the inventive Finn Russell to Clermont places a huge onus on talented 21-year-old outhalf Adam Hastings.
This season’s formguide: W W W L W.
Prospects: Jury out on post-Finn Russell era, especially as Stuart Hogg’s injury is a huge loss. Failed to deliver when it came to the crunch last season and are almost in must-win territory at home to Saracens on opening weekend. Pool runners-up.

Coach: Pierre Mignoni.
Last season:  Didn’t qualify.
How they qualified: 5th in Top 14 and semi-finalists.
Recruitments: Jonathan Wisniewski, Clermont winger Noa Nakaitaci and Waikato Chiefs centre Charlie Ngatai (four tries in his last three games) signals their ambition.
Key man: Wisniewski, who should have won more caps, pulls the strings with an understated, under-rated game. How often he plays in Europe will reveal much.
This season’s formguide: D L W W L W.
Prospects: The latest of the nouveau riche, big city clubs to add to the urbanisation of the Top 14, Lyon are likely to prioritise Europe for this season at any rate.

Coach: John Mulvihill.
Last season: Didn’t qualify.
How they qualified: 4th in Conference A/Challenge Cup winners.
Recruitments: Moldovan tighthead prop Dimitri Arhip and US ex-Saints lock Samu Manoa, admittedly past his brilliant best, don’t seem to compensate for the retirement of Sam Warburton and departure of Alex Cuthbert.
Key man: Gareth Anscombe. Now their established 10, he brings quality, goal-kicking and self-belief and mental strength to drive this team, especially when they may be about to wobble.
This season’s formguide: L L L W W.
Prospects: Talented but inconsistency remains and although they could well provide a scalp or two it’s hard to envisage them still standing after back-to-back meetings with Saracens.

Coach: Wayne Pivac.
Last season:  Semi-finalists.
How they qualified: Pro14 runners-up.
Recruitments: Kiwi Blade Thomson and Cheetahs pair Uzair Cassiem and Clayton Blometjies have arrived but John Barclay, Tadhg Beirne and Scott Williams have departed.
Key man: Rhys Patchell. The catalyst for their inventive running game.
This season’s formguide: L W W L W.
Prospects: They look slightly weaker generally and it doesn’t augur well when the head coach is moving on to greener pastures (ie Pivac to Wales), but the way the fixtures have fallen they should remain in contention until January at least. Second in pool.

Coach: Geordan Murphy.
Last season: Pool exit, one win in six.
How they qualified: 5th in Premiership.
Recruitments: Amid many comings and goings, Kyle Eastmond was a class operator at Bath before moving to Wasps and now joining Leicester.
Key man: George Ford. Has actually been in wonderfully creative form this season, and hence the Tigers attack has been potent.
This season’s formguide: L W L L W.
Prospects: Sacking Matt O’Connor after a summer turnover, and one game into a new season, didn’t look too visionary. Have leaked more points and tries in the Premiership this season and Welford Road not the fortress of yore.

Coach: Dan McFarland
Last season: Pool exit after four wins.
How they qualified: 4th in Conference/play-off winners.
Recruitments: Jordi Murphy, Marty Moore, Billy Burns, Will Addison and Henry Speight have arrived while Jared Payne, Andrew Trimble, Tommy Bowe, Paddy Jackson, Stuart Olding, Charles Piutau and Paul Marshall have retired or moved on.
Key man: John Cooney. The goal-kicking scrumhalf and occasional outhalf seems to be carrying a heavy load again.
This season’s formguide: W W W D L.
Prospects: A weight is off their shoulders and McFarland is a shrewd choice, but improvement in Pro14 would be a satisfactory starting point with home wins and a shot at this pool a bonus.

Coach: Dean Richards
Last season: Didn’t qualify
How they qualified: 4th in Premiership/semi-finalists
Recruitments: Like Toby Flood last season, so too George McGuigan has returned from Leicester to revive a career that once had him touted as an English hooker. Maxime Mermoz has returned to Toulouse.
Key man: Niki Goneva. The 34-year-old was voted last year’s player of the season and with the sidestepping Sinotti Sinotti gives the Falcons a real cutting edge
This season’s formguide: L L W L L.
Prospects: Four close defeats this season suggest they slightly over-achieved last season. Making first appearance in the Cup since they were quarter-finalists in 2005, they’ll do well to emerge from this group.