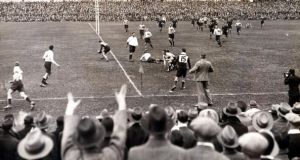 Action from South Africa v Australia at Newlands in July 1933, the tour on which Aubrey Hodgson made his Wallabies debut. File photograph: Getty Images

A recent lockdown clear-out prompted the discovery of a semi-skimmed and long-forgotten letter forwarded to me by my mother some years ago; a piece of correspondence she had chanced upon while doing some domestic decluttering of her own. It had been written by my uncle, a former professor of anatomy at the University of Galway, during his days doing the rounds at a Sydney hospital way back in 1978.

Writing to my father on the flimsiest of airmail notepaper, with a neatness of hand that belied his profession, he revealed that he had been lucky enough to get talking to “a very interesting character” the previous evening. A legendary figure known in Australian rugby circles as the Bull, Aubrey Hodgson had been singing the praises of the Ireland lock Willie John McBride and the Welsh outhalf Barry John, two titans of the northern hemisphere game the former Wallabies forward, then aged 66, hugely admired.

Upon being informed that my uncle had a five-year-old nephew back in Ireland who had been named after the Welshman in a fit of what is probably best described as optimistic but utterly misguided paternal delusion, Hodgson was handed a pen and scribbled a message to the boy.

“To Barry John Glendenning,” reads the message on the back of a Christmas card from the then president of the Irish Rugby Football Union. “Be as great as John McBride the greatest of all Irish forwards. Please be as great. Aub Hodgson [THE BULL].”

More than 40 years later, it was rather chastening to learn that it hadn’t just been my old man who I had gone on to let down through a combination of bumbling ineptitude and cowardice on the rugby field.

Subsequent research revealed that old Aub was indeed quite the fascinating character. A bit of a mad bast*rd, by all accounts. Described in my uncle’s letter as “a physical wreck now getting about on crutches and drinking like a fish but still enjoying life”, he would die four years later. A stalwart of Manly rugby club in Sydney, first as a player then a coach, he was the recipient of an excellent send-off.

In his book Inside the Wallabies, the Australian writer Greg Growden fondly recalls the standing ovation given to the Bull as his coffin disappeared behind the curtains at Sydney’s Northern Suburbs crematorium. “He was forever surrounded by revellers who were charmed by his reminiscences, his outlandish behaviour, his vast football knowledge and his eagerness to be the ultimate host to any visiting player,” he wrote.

Born into a privileged background in 1912 and the only one of six brothers to be given the kind of name that makes a certain teak-toughness on the rugby field an absolute necessity, Hodgson won 11 caps for Australia. This deceptively low tally was nothing to do with any lack of ability on his part, but more a testament to the infrequency with which his country played. It didn’t help that his international career was interrupted and ultimately ended by the outbreak of the second world war.

The Australasian rugby writer and historian Spiro Zavos recalls Hodgson being “as good as any contemporary player anywhere in the world at his peak in the 1930s”, describing him as “a snarler of a loose forward who terrorised opposition backs and sometimes his own with the fury and aggression of his play”.

One image from the archives shows him squaring up to the South Africa prop Harry Martin, who was looking for revenge following a number Hodgson had done on his semi-conscious teammate, the scrumhalf Pierre de Villiers.

Fond of a bet, he once challenged the Australia Test cricketer Sid Barnes to a popularity contest

A versatile backrow merchant who began life as a prop, Hodgson made his first Test appearance against South Africa at Durban in 1933 and his 11th and final one against New Zealand just over five years later. History suggests he could and should have made a lot more. A member of the Wallabies squad that disembarked at Southampton on September 2nd 1939, he would certainly have got to test himself against northern-hemisphere opposition but for Britain’s declaration of war against Germany the next day. Instead, his final duties as a an Australia player involved turning up for an audience with British king George VI and a brief period spent filling sandbags before a fraught voyage home keeping a watchful eye out for U-boats.

Hodgson volunteered for the Second Australian Imperial Force but his service was delayed by a broken leg sustained the next day while playing for Manly against Drummoyne. Despite announcing his retirement in 1944, he did not stay out of the game for long and excelled in state trials before Australia’s 1946 tour of New Zealand. Surprisingly, he failed to make the squad.

“I heard he had the letters NTTA indelibly marked against his name – Never To Tour Again,” wrote a fellow international, Professor Max Howell, in a memoir. “I suspect the rumour was correct that somewhere and some time on tour he had overstepped the bounds of propriety.”

Although Hodgson had dirtied his bib, he remained much loved in his native land due in no small part to his reputation as a hell-raiser. Fond of a bet, he once challenged the Australia Test cricketer Sid Barnes to a popularity contest, inviting him to stand alongside him in Sydney’s Martin Place during Monday rush hour to see which of them would be recognised and greeted by the most passers-by.

“Aub won that bet by about 50 people,” Growden would later write, before lamenting the fact the player became “a bit dotty in his old age, welcoming visiting teams at Sydney airport in his pyjamas and donning his dressing gown when he flew to interstate matches”.

It may well have been that version of Hodgson my uncle bumped into in Sydney, when he got the autograph for the five-year-old me. “Some day Barry may get a kick out of having it,” he wrote to my father. A kick, certainly. And an education on the subject of a fascinating life well lived by a nails-hard larrikin named Aubrey. – Guardian