The Offload: A Munster win over Leinster will merely paper over cracks

Was Rassie Erasmus on a reconnaissance mission for the Springboks at Munster? 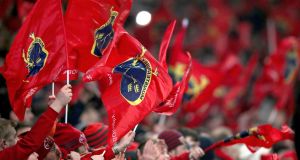 Best Club in the World

In 2011 the Red Army lorded it over Leinster in Thomond Park a week after their arch-rivals were crowned European champions. That Pro 12 final delivered Munster’s last trophy so catching Leinster, who have since gathered six, in similar circumstances at the RDS come Saturday week would bring Munster “back to zero” and nothing more. That’s a phrase Johann van Graan keeps using to the point of ridicule.

“The only thing that matters is we won the game,” he uttered after stumbling past Benetton Treviso in front of a paltry 10,042 crowd on Saturday. No, Johann, what matters is Conor Murray being hauled off while Munster trailed by a point with 14 minutes remaining. What matters is Joey Carbery’s health. What matters is, before Saracens mopped the floor with them, the South African was gifted a two-year contract extension.

Barcelona watch out, Munster’s published aim is to become “The Best Club in the World.” This “club” still operates from Cork offices despite the squad relocating to Limerick.

The disconnect is glaring.

“Garrett [Fitzgerald] will always say we are a people-based organisation,” interim CEO Philip Quinn while Fitzgerald recovers from major surgery, told the Irish Examiner. “It’s all about the people.”

Somebody should tell the people because handing out free tickets to cover gaping holes in the shiny, as yet unpaid for, stadium for do or die rugby is a worrying trend.

The best club in the world can’t even announce their team properly.

Carbery was starting according to Friday’s official email with no sign of JJ Hanrahan. Twelve minutes later came an unexplained “correction”; no Carbery, Tyler Bleyendaal wears 10 with Hanrahan on the bench.

Of course Hanarhan’s boot inched them beyond a Treviso outfit that unforgivably blew this opportunity. There are multiple examples but Chris Farrell’s 72nd-minute tackle on Toa Halafihi saved Munster’s season. Halafihi butchered a four-man overlap. That was before Antonio Rizzi’s fluffed drop goals. Such decision making and poor execution would be familiar to the dwindling Thomond Park audience. Beating a jaded Leinster will merely paper over cracks in the cement. Just like 2011.

“I do feel sorry for Israel but there are consequences to your actions. I don’t say this lightly and what I’m about to say, the language I use is hard and it’s for a point, it’s to get that message across. There are literally kids in the suburbs killing themselves. I say that with the greatest sense of respect and I’m not implying that Israel is responsible solely for that – please don’t take it that way – but these type of remarks can and do push people over the edge. There can’t be any tolerance of bigotry. LGBTIQ people [are] five times more likely to die of suicide than the general population, 16 per cent of LGBTIQ people, before the age of 27, have attempted suicide twice.” – Ian Roberts, Australia’s first openly gay rugby player.

By the Numbers – 50 metres, that was how far out JJ Hanrahan’s penalty was against Treviso at Thomond Park.

Conspiracy theory: Springbok director of rugby Rassie Erasmus came to Ireland on a reconnaissance mission using Munster as a means to blood key Springboks for Japan 2019 and beyond.

Exhibit A: Thomas du Toit helping the Natal Sharks scrum destroy the Canterbury Crusaders in Christchurch. Erasmus flooded the Munster ranks with South Africans while sharpening his database on potential Springboks based in Europe.

He repeatedly stated he would not be returning home after one season.

He also said he remained in constant communication “formally and informally” with SA Rugby officials throughout the 2016/17 season.

The reason for our hiding-in-plain-sight theory is the Sharks 21-all draw with the Crusaders provided the latest evidence that Ireland’s World Cup quarter-final opponents could well be New Zealand.

Similar to 2003 and 2007, the All Blacks haven’t figured out key combinations in midfield, frontrow or unearthed a blindside in the Jerry Collins and Jerome Kaino mould. They won’t be the force of 2015, especially if they rely heavily on 30-somethings from 2015 in the team, while Erasmus and Jacques Nienaber quietly construct a Springbok squad that brings frightening power and depth from Faf de Klerk’s generalship at Sale, Marcell Coetzee’s brilliance for Ulster to Duane Vermeulen reappearance on the Bulls.

Maybe, just maybe, The Rassie Masterplan was hatched as far back as 2015 with unconfirmed reports spotting Nienaber on the grassy knoll.

Ulster rugby player and son of Presbyterian minister supporting journalist who eyeballs IRA men would have signalled very dangerous ground in the bad old days before the Good Friday Agreement.

The only surprise about Jacob Stockdale – following his supportive tweet for BBC’s Emma Vardy door-stepping Saoradh’s Thomas Ashe Mellon and associates leaving court in Derry – was his Twitter following is less than 10,000. The Ireland winger has yet to attain global superstar status but soaring talent and a temperament way beyond his 23 years makes this inevitable.

Following the footsteps of Lyra McKee, Stockdale became representative of Northern Ireland’s modern generation when stating: “I’m not a believer in using my position as a sports person to push my political standing on anyone but I loved seeing this, we refuse to be thrown back to the past by these people or anyone like them. Well done @EmmaVardyTV”.

Vardy’s courageous effort deserves support with the initial flow of hateful tweets, safely cloaked as championing Stockdale’s genuine words, interrupted by one reference to JFK’s 1961 speech: “The only thing necessary for the triumph of evil is for good men to do nothing.”

Twitter increasingly looks like a cesspit but Stockdale temporarily stemmed that tide. What’s truly encouraging is this young man has already found his voice.