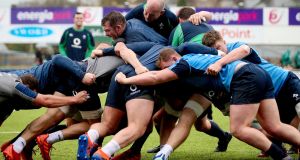 On August 26th the sport of rugby union will celebrate the 25th anniversary of professionalism. Well, maybe “celebrate” is pushing it.

Back in 1995 the lines in the sand were immediately drawn between the owners of the clubs in England and France and the RFU and French Federation, as they would between the players and their paymasters as well. A quarter of a century on and in many instances those feuds are as bitter as they ever were.

Nowhere is this more so than in England, where those club owners are not only at war with the RFU and the outside world over the vexed issue of a global calendar, but also with their own players, after imposing pay cuts and giving them a 24-hour ultimatum to sign new contracts without any consultation.

In last Monday’s World Rugby Forum between all professional stakeholders in both hemispheres, the Rugby Players’ Association CEO Damian Hopley confirmed that the English and French clubs and their respective unions went at each other “like a pack of hungry wolves”. This prompted Hopley to conclude. “We’re not in a great place as a sport in terms of how we’re conducting ourselves.”

Relations between the IRFU and its players are nowhere near as hostile as in England, Australia and Wales, and have improved to such a degree over the years that when the coronavirus pandemic hit and the sport ground to a halt, the two parties were swiftly able to agree upon a pay deferral scheme.

Even so old attitudes will be seen to have resurfaced in the manner the union are backing the players into a corner over their proposed 20 per cent pay cut.

Few, if any, are better equipped to cast his eye over the latest tete-a-tete between union and players than Niall Woods. As an international winger when the game turned professional in 1995, Woods was part of the flight of the wild geese to the English club game before working with Hopley in the RPA, and then coming home to set up the Irish Rugby Union Players Association (now Rugby Players Ireland) in 2003.

Woods was CEO of Irupa for eight years until January 2011. “The first four or five years were feisty, but they had to be,” he recalls, having since become a players’ agent whose company Navy Blue Sports continues to deal regularly with the IRFU as well as English and French clubs.

In truth, the players retain a mistrust of the union going back to pre-1995 days. Back then, the union didn’t want to know about professional rugby, much less professional Irish players.

To the union’s credit, and particularly Tom Kiernan and Syd Millar, they adapted. The provinces were belated made fully professional and the prodigals were brought home from the turn of the millennium and the rest, as they say, is history.

The IRFU are rightly credited for running a prudent business model and overseeing a system which has made the national side and provinces punch above their weight for what, after all, is the country’s third sport. The Irish system is also widely envied abroad, albeit it’s not perfect – witness the World Cups. No system is.

In the same way that the IRFU had to be dragged kicking and screaming into professionalism, they were innately aghast at the idea of a body being formed which formally represented the players.

The IRFU will maintain that they gave Irupa part funding, but the alternative might otherwise have seen the Irish players join the RPA. Ultimately, it was the smart move by the union.

Irupa barely came into being when the union threatened to disband Connacht as a professional entity and subsequently, in May 2004, The Irish Times ran an interview with Woods under the headline “Battling to give players a voice” in which he stated: “I think the key thing is that, as much as the IRFU have adjusted to professionalism, the attitude to the players is still an amateur one. The culture just hasn’t changed toward the players, whereas the players themselves have changed.”

That 2004 stand-off was over a tour fee for the series in South African. Due to an unusual flaw in the contracts, the players did not have to tour unless a tour fee was agreed and after a stand-off the players backed Woods and the union had to back down and pay a much improved tour fee.

However, a strike is not really an option for the RPI. They don’t have trade union status, so such an action would be in breach of contract.

“The key to this is transparency and you can’t ask a player to take a pay cut or any employee to take a pay cut, when they don’t know what the effect is on the business,” says Woods, who adds: “There’s very little trust in professional sport, full stop, because it is so ruthless.

“You can dress it up all you want with unions looking after the grass roots and the welfare of the players, but it’s a business. The players are assets and they have short careers, so if they are going to take pay cuts they need to have some level of understanding that the damage which has been done to the business.

“Saying they’ve lost €10 million doesn’t mean a huge amount to a player. That’s not questioning a union’s integrity, or anything like that, but you’re talking about people’s livelihoods and careers, especially when they are so short compared to normal jobs.”

“You need to be transparent, and maybe the point is they (the union) have to change because clearly the relationship with the players hasn’t changed that much in 20 years.”

But the IRFU have historically been reluctant to divulge their financial information. For example their abridged annual accounts give turnover and a breakdown of costs by department, but they don’t have to file their accounts publicly because of their tax status.

The players would like to know if the union are that badly off or if they could they make cuts elsewhere. That’s vecause the players suspect they are the easy target. But if there is to be compromise and an agreed pay cut the key will be for how long. If, say, by some miracle the Aviva is full for Six Nations games next year, it would seem unfair, given the short length of their careers, for the players to still be receiving less in their salaries.

Representatives of the two bodies met for a second time last Wednesday and will do so again next week. Word is that the union have been more compliant and revealing with their accounts than heretofore.

Maybe this is a turning point.