‘People talk about living the dream. I’m not sure there’s much of a dream at the moment’ 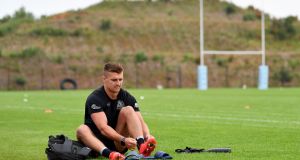 There has been a mass scramble to try to persuade players to amend existing deals and re-sign prior to the deadline on Thursday. File photograph: Getty Images

English club rugby union is in chaos with some players being given 24-hour ultimatums to sign new contracts in order to exploit a loophole in the new salary cap rules. The Rugby Players’ Association says it is working around the clock to help hundreds of players who risk falling foul of their employers if they do not agree to rip up their current contracts.

Following the decision to reduce the permitted cap by £1.4m to £5m plus allowances from the 2021-22 season, it emerged that only 75 per cent of the wages of a currently contracted player will count towards it.

There has consequently been a mass scramble to try to persuade players to amend existing deals and re-sign prior to the deadline on Thursday. With many of his members under pressure to accept permanent 25 per cent cuts and Premiership Rugby having ignored offers of mediation, the RPA’s chief executive, Damian Hopley, believes trust within the English game has seldom been in such short supply.

“It’s an absolute circus … I’ve never known anything like it,” said Hopley, who is particularly concerned for middle- and lower-income players who have been contacting the union seeking advice. “We have situations where players are being given contracts and told they have 24 hours to sign them. It beggars belief.

“We’re talking about the next three years of a player’s life. In what other walk of life would you be given 24 hours to sign a contract with barely any time for consultation? The upshot is that we’re on calls pretty much 24-7.”

There are suggestions that between a third and a half of Premiership players could be reluctant to abandon their existing deals. The RPA, which had a blistering public exchange of views with the leading club owners last week, also fears massive damage is being done to the reputation of the sport.

“You’ve got young men, starting out their rugby careers, who are looking around thinking: ‘What have I signed up to?’” Hopley said. “People talk about living the dream. I’m not sure there is much of a dream at the moment.

“If players feel the [NEW]offers are good offers and they want to take them, we’re saying: ‘Go for it.’ But this is about the hundreds of other players who won’t be happy and feel pretty aggrieved at the absolute lack of process. That’s where we step in as the players union and say: ‘We need to sort this out.’”

With rumours also circulating that some club owners would not be too unhappy if a couple of their rivals folded, thus ensuring a bigger slice of the central pie for those still standing, Hopley also rejects the theory that the crisis has been largely caused by the top players’ excessive wage demands.

“The economic model for club rugby was broken and the Covid-19 pandemic has exposed all the faultlines. But the players didn’t create that. When owners talk about players on vastly inflated wages I’m saying: ‘Yes, but you’re the person who signed those off.’ I know the world has changed but why can’t there be a collective agreement where the clubs and the players are aligned and say: ‘We’re all in this together?’ It’s the unreasonableness of it all that we’ve found most galling.”

The situation is further complicated by a shortage of other options for players who choose to exert their legal right to walk away from an employer who reneges on an existing contract. With every club in the country facing significant financial pain if the coronavirus outbreak does not ease soon, only the fortunate few will be able to find lucrative deals in France or Japan.

“Some clubs are doing a really good job in terms of explaining the numbers, as any reasonable employer would do,” Hopley said.

“At the other end of the spectrum not so much. The last thing I’d want is for a club to go bust: 75 per cent of no salary is no use to anyone. But it comes back to transparency and creating an environment where trust is prevalent. The last three months have really been destroying that trust. That’s the sad thing about all of this.

“When you hear about the English and French clubs and their respective unions going at each other like a pack of hungry wolves at this week’s World Rugby forum, we’re not in a great place as a sport in terms of how we’re conducting ourselves.”

The English clubs, however, insist it is the unions who should change their tune if talks over a new global fixture calendar are to be successful. A PRL spokesman said the clubs still felt they were not being listened to as equal partners and remain against switching the July Test window to October.