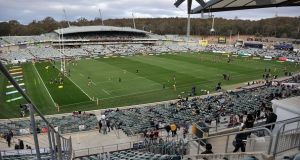 The ACT Brumbies have been given the green light for a crowd of up to 1,500 spectators at their Canberra Stadium when professional rugby union returns to Australia in July after a four-month pause because of the coronavirus outbreak.

The Brumbies will host the Melbourne Rebels on July 4th on the opening weekend of the domestic Super Rugby AU competition.

The Brumbies said they expect crowd limits to be eased further before their second home match against the Queensland Reds on August 1st, pending approval from authorities, but gave no detail on specific arrangements to ensure social distancing.

Games have been played at empty stadiums because of social distancing restrictions, but about 2,000 fans were allowed into the Adelaide Oval last Saturday to watch the Australian Football League derby between the Adelaide Crows and Port Power.

The northeastern state of Queensland is allowing crowds of up to 2,000 into stadiums to watch National Rugby League (NRL) games from this weekend on a trial basis.

In a further easing of restrictions, the NRL said on Friday that it would allow clubs to host matches at their usual home stadiums from July, having been previously confined to sanctioned venues under strict biosecurity protocols.

“This is an outstanding outcome for our clubs, our players and importantly our fans who have been so loyal, and patient, throughout this crisis,” NRL chairman Peter V’landys said.