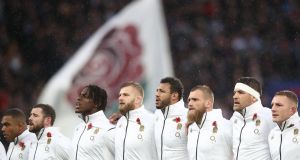 England line up ahead of their clash with the All Blacks at Twickenham in November 2018. Photograph: Phil Walter/Getty

The English Rugby Football Union is conducting a review into the use of Swing Low, Sweet Chariot by England supporters, admitting that many of them are unaware of its origins as a song about slavery.

England fans have previously been criticised for “cross-cultural appropriation of a US slave song” by academics, and the Black Lives Matter movement has brought renewed focus on its use at Twickenham and matches abroad.

Maro Itoje recently described the background of the song as “complicated” and the RFU – aware that the lyrics are plastered all over Twickenham – is set to take action. The union said it is reviewing the song’s “historical context” and acknowledged the need to educate supporters as to its sensitivities.

Indeed, the RFU did not rule out urging supporters not to sing the song altogether at a time when institutions in England with historical links to slavery are coming under increasing pressure to act.

Sell-out crowds will not return to Twickenham in the short term but the RFU chief executive, Bill Sweeney, is optimistic England could host up to 40,000 fans this autumn if the government relaxes its physical distancing rule to one metre.

“The RFU has stated we need to do more to achieve diversity and we are determined to accelerate change and grow awareness,” said an RFU spokesperson.

“The Swing Low, Sweet Chariot song has long been part of the culture of rugby and is sung by many who have no awareness of its origins or sensitivities. We are reviewing its historical context and our role in educating fans to make informed decisions.”

It is believed the song was first sung at Twickenham when Martin “Chariots” Offiah was playing in the 1987 Middlesex Sevens tournament. The following year it became a popular refrain among England supporters when Chris Oti scored a hat-trick against Ireland. The song’s origins are rooted in US slavery however and it is believed to have been written by the American slave Wallace Willis around the 1860s.

England players have often spoken of the lift they get from the crowd when Swing Low, Sweet Chariot echoes around the stadium and supporters were urged to sing it during the haka when England last hosted New Zealand in November 2018. During his time as national captain, however, Dylan Hartley admitted he was unaware of the song’s origins and a number of other England players have done the same.

This week Sweeney vowed to increase diversity within the RFU following the appointment of Genevieve Glover as chair of the union’s diversity and inclusion implementation working group. There has never been a black member of the RFU’s 14-strong board and of the 55 council members only Maggie Alphonsi is black. “We have undertaken some very good initiatives at the grassroots level to encourage more diverse participation however, that in itself is not enough,” said Sweeney. “We need to do more to achieve diversity across all areas of the game including administration.”

The RFU was also one of a number of sporting bodies to sign a statement pledging a commitment to tackling inequality within sport. “The appalling death of George Floyd, the global protests that have followed and the powerful message of the Black Lives Matter movement has made every section of society take notice and confront an ugly truth,” said the statement.

“Systemic change must be made at all levels so that we can become truly reflective of our wonderfully diverse society. We can no longer rely on black role models at the elite level speaking out, we must join together to become better and to support every member of the sport and recreation community.” - Guardian