Andrew Porter: Rugby’s nearly back, I’m as excited as a kid again 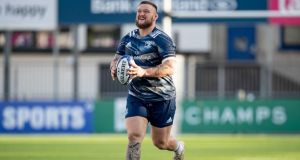 Now it’s starting to feel exciting again. Next Monday the Leinster squad will resume training in our Performance Centre in UCD. After three months in lockdown and in isolation, returning to what was once familiar will seem like a welcome change of scenery.

All the Leinster players and coaches had a zoom meeting with the IRFU’s Medical Director, Rod McLoughlin, Leinster’s head physio Garreth Farrell and our team doctor Professor John Ryan on Thursday, to explain to us what training will look next week.

We will be divided into small groups so that social distancing can be adhered to and certain parts of the Performance Centre will be closed off. There will be sharp turnarounds in that one group will be on the pitch while another is in the gym, and the schedule is spread throughout the day so that every player in the squad will be able to come in.

As exciting as it is, I’d say it will be tough for the first week or so but it really was incredible to see all the work which the medical team and backroom staff have done to make it possible.

There was a similar, military-like precision on Wednesday when we went into UCD to be tested for Covid-19 as part of the Union’s return to play protocols. It was refreshing to see a few of the lads for the first time in person since the season was shut down.

It was like seeing family again after an absence of three months. Well, maybe it wasn’t that emotional! But these are mates, your best mates, as well as teammates.

I missed meeting and training with them every day as well as playing with them every week. For a rugby player that’s what you look forward to the most, that brotherhood within the squad. It will also be good to have that competitive edge to training.

The lockdown will have changed us all to some degree and I almost feel like a new person. Not only did the S&C staff give us fitness regimes but they gave us our GPS as well, so there was no hiding place.

But I’ve been able to focus on relatively weaker points, both physically and mentally. I’ve been working closely with Liam Griffin, the head coach of the Wexford hurling team when they won the All-Ireland in 1996. Mick Kearney, our former Irish manager, has been working the national squad as a mentor for a couple of days each week and through the EY Entrepreneur of the Year programme he linked up the entire squad with individual mentors.

I was lucky. I was paired with Liam.

He’s been through it all, as both a player and a coach, and is now a successful hotel manager. He’s been brilliant at helping me achieve more of a balance between my life in and outside rugby, and in making plans after my playing career.

I now have a better appreciation that I won’t always be a rugby player and I am learning about the importance of planning and goal-setting outside the game as well through the homework which Liam has given me.

Obviously physical training requires more discipline, doing the work you need to do which no-one sees. It’s been an interesting experience to apply that to my life outside rugby.

There have been other positives to the lockdown. When it started, we could all hear the birds more and the air was cleaner. The water in Venice was clearer than in God knows how long, which just shows the benefits to the environment from having fewer planes in the sky and fewer cars on the roads.

I’ve been lucky that the lads in Toyota sorted me out with a RAV4 hybrid. I was in a C-HR before then. My first car was an Opel Corsa, and then I had an Opel Astra which had a bit of history to it. Apparently it was Gordon D’Arcy’s car beforehand, as Opel used to sponsor Leinster through Kenilworth, where my uncle Brian Priestman was a partner.

I loved my scrambler bike as well, back on our family holidays in Carlow and Wicklow. My dad took me to a few tracks and I’d go over a few jumps. When I first got the bike I was 14, and I think it weighed more than I did. I’d say if I sat on it now the mudguard would be rubbing off the wheel.

The RAV4 gets me from A to B alright. You get stuck in the concrete jungle. With the easing of restrictions to allow us to travel in our own county I’ve been reminded what County Dublin has to offer. Trees. Fields. Forests. Enniskerry, Kilternan and the Ticknock mountains are only up the road from me.

Myself and Elaine have taken Cheika for walks up there and it feels like the freedom of being back to normal. It’s the small things like that make a big difference to you mentally.

Cheika has bought into all this additional walking too. He’s taken to sitting by the door in expectation of you getting off the seat and putting on his lead. In making the community more active and healthier over this period, it might change habits permanently.

The streets have been packed, and I’ve never seen so many walkers, joggers and cyclists. Bringing Cheika for a walk in Cabinteely Park and seeing so many people out and about has reminded what my childhood was like. Because when you’re a kid you don’t want to spend any time inside, you want to be outdoors and playing all the time.

Now we’re about to go back into a three-week block, a pre-season of sort, before a week’s regeneration and then we’re into the run-up to, hopefully, playing games again from August 22nd. I’m as excited as a kid again.