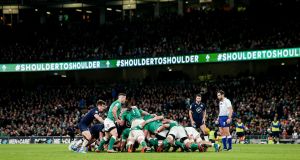 Reports emerged over the weekend that the IRFU are looking for a 20 per cent pay cut among players. Photo: Gary Carr/Inpho

While it was inevitable that all parties were going to have to suffer some financial pain, equally there was never going to be instant agreement between the various players unions and their paymasters. So it is that the battle lines are being drawn and now Ireland has joined the fray.

With the players in all four provinces operating from home until they return to training next Monday, it is more difficult to ascertain the temperature amongst them, albeit privately they’d probably acknowledge that a concession of some sort will be necessary.

However, there’s also anger amongst some players that the IRFU publicly confirmed negotiations for a 20 per cent pay cut across the board have already begun, having been agreed with all other staff, including coaches. (Shock, horror, a newspaper actually printed this). But in any event the players feel a gun is being put to their heads.

It’s already clear that the much improved relationship between the IRFU and Rugby Players Ireland (which swiftly agreed a salary deferral scheme after the coronavirus pandemic struck) has been soured by this latest development.

That much was made clear by the RPI’s statement on Sunday saying there were “very disappointed” with the Union for publicly confirming these pay cut proposals were in negotiation.

This is because the IRFU and RPI were still in the very early stages of dialogue, albeit these discussions have already taken place between the respective CEOs and will be renewed this week.

It is, of course, the players who bring money into the game and are the best paid. So for the IRFU to agree on a 20 per cent pay cut with its own staff in their head office and in the four provinces is one thing, it is quite another to have a 20 per cent salary cut agreed with, or imposed upon (dilute to taste), the players.

It is also one thing for staff to switch to a four-day week even if, almost certainly, that probably means longer hours in those four days. This is probably equally true of coaches, whose workload will not effectively be reduced by 20 per cent either.

However, for players to prepare and perform as a professional rugby player they will not be able to reduce their workload by even one per cent, never mind 20 per cent.

Furthermore, these losses are in the context of a professional playing career which might, if they are lucky, last 10 or even 15 years at an extreme push. These are not jobs for life. They are also short, highly attritional jobs which, in the vast majority of cases, have no tangible benefit for the careers in the real world which take up most of their adult working lives.

They have no security of tenure beyond their existing contracts and if their careers are ended prematurely by injury, they are paid nine months of their existing salaries where before it was six months.

Even if a pay cut of some kind is agreed between the IRFU and RPI, will it be legally binding? In such circumstances, might a player, his agent and his legal advisor decree that a salary cut would be in breach of their contract and thus entitle them to seek employment elsewhere? These are unprecedented times.

Even then, how many clubs in England and France would be in a position to match or better an existing deal which a player has with the IRFU? There won’t be too many offers floating around out there.

There is threatened strike action by the Premiership players in England after temporary 25 per cent salary cuts were imposed during the shutdown, with the certainty of more cuts to follow given the agreed reduction in the salary cap and henceforth little in the way of dialogue.

In Wales, the players agreed a temporary salary cut of 25 per cent for three months at the beginning of April. But, in light of the WRU slashing their funding of the regions from £26 million (€29m) to £3 million (€3.3m), and in the certain expectation of the WRU seeking to impose further salary cuts imminently, the Welsh Rugby Players Association (WRPA) recently issued a strongly-worded statement.

“Against a backdrop of political manoeuvring, mismanagement and issues around trust and transparency across the professional landscape,” the WRPA demanded change in how the game is run in Wales.

Similarly here, the RPI will have to be given access to the Union’s financial position, both currently and in different scenarios moving forward. Only then could agreement be reached, for as well as the extent of the cuts (be it 10 or 20 per cent) the length of salary reductions before being reviewed would also have to be agreed upon.

No less than in Wales, England or anywhere else, it’s not the players’ fault that the game has gone into shutdown. But then again, it’s not the fault of the Union or provinces/regions/clubs either.

It’s like any industry, if there’s no revenue streams coming in, there’s no wages going out. In the heel of the hunt, the IRFU and the provinces have all taken huge financial hits and the players will have to agree a salary reduction of some sort, but on a temporary basis - albeit 20 per cent does look too steep.

England need 36 to win as bad light halts play in Sri Lanka 13:04
Bríd Stack hospitalised after injury in AFLW pre-season friendly 11:28
India rearguard frustrates Australia and leaves series in the balance 11:19
Brendan Steele takes the lead at Sony Open with a round of 61 11:10
Man United head to Anfield as top dogs but Liverpool know how to respond 11:03
Crossword Get access to over 6,000 interactive crosswords