New Zealand rugby returns to play and it did not disappoint 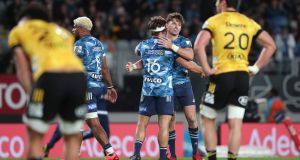 Beauden Barrett of the Blues (centre-right, facing) celebrates with teammates at the final whistle during the Super Rugby match between the Auckland Blues and Wellington Hurricanes at Eden Park stadium in Auckland on June 14th, 2020. Photograph: Michael Bradley/AFP

As rugby and the crowds returned to New Zealand over the weekend the subplots many people craved did not disappoint.

Just ask the Gatland family and Beauden Barrett. The two-time world player of the year made his debut for the Auckland Blues in a 30-20 victory over his former team the Wellington Hurricanes in front of 43,000 at Eden Park.

The moment everyone was waiting for came in the 15th minute when Barrett’s All Black teammate Dane Coles barrelled over him for a try that was celebrated by a gang of Hurricanes surrounding their old friend.

“That was the moment [Coles] wanted eh?” Barrett laughed. “But I think it probably would have been better for him if I had the ball! He’s a tough man to stop one on one. He’s pretty quick and he still has got it. I just have to work on my covering tackles.

“My back felt his shoulder somewhere towards the end of the game,” a grinning Barrett added. “I don’t know where it came from. I’ll have to check the tape.”

Chiefs coach Warren Gatland – who will take a sabbatical from his new job to guide the British and Irish Lions around South Africa next year – discovered over dinner on Friday night that his son Bryn would be in the opposing team.

Gatland was a late call-up to the Highlanders squad after injury to Josh Ioane and the 25 year old came off the bench to drop the winning goal in the 79th minute.

“I had dinner last night with him and mum and halfway through dinner he got a text and said ‘you’re on the bench tomorrow’ and I said ‘I don’t want to give the game plan away’,” said Bryn Gatland.

The Chiefs and Highlanders struggled to adapt to stricter interpretations at the breakdown, as referee Paul Williams whistled for 30 penalties, but within 24 hours the Blues and Hurricanes appeared to have adjusted.

The Northern Hemisphere is due to follow New Zealand back onto the field in August but the current conflict surrounds player wage cuts.

Premiership clubs in England voted last week to reduce the salary cap in 2021 by over €1.5 million, without the approval of the Rugby Players Association.

“The unfortunate reality is that people are going to lose their jobs and accept pay cuts in many industries across society. Rugby is no different,” Bristol chairman Chris Booy told the Telegraph. “Clubs have to do what they need to do to survive this and if the biggest cost is players’ wages then that’s where the negotiations have to happen.”

On Sunday, Rugby Players Ireland stated: “We are very disappointed to see recent media reports about proposed player salary cuts. We are in the very early phase of discussions with the IRFU to establish fully the current and long-term financial position of the union and only then can the players fully consider any proposal.”

1 Irish duo set for AFL Grand Final as sport lifts the gloom Down Under
2 Jackie Tyrrell: Winter is here and a machine-gun Championship awaits
3 Barbarians match in doubt after 12 players go on unauthorised night out
4 Colin Byrne: Hard to understand how golf has become the bogey man now
5 Fresh faces and renewed appetite: Is this a new era for Irish rugby?
Real news has value SUBSCRIBE