Matt Williams: Kiwi rugby is back and celebrating series win over Covid-19

I forgot how much I missed the sight of grown men acting like children, just for fun 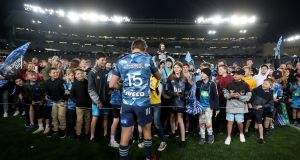 Beauden Barrett of the Blues signs autographs after a match against the Hurricanes at Eden Park in Auckland, New Zealand. Photograph: Hannah Peters/Getty

In the illustrious history of The Irish Times, I am quite sure that no article on rugby has ever started with a quote from the brilliant Canadian-born composer and artist, Joni Mitchell.

So dear readers let us jump right in, up to our collective armpits with Joni.

“Don’t it always seem to go that you don’t know what you got ‘til it’s gone.”

Rugby had been our companion, as constant as the stars, generation after generation, then without warning, it vaporised into the isolation.

Joyously last weekend, in the land of the long white cloud, Aotearoa, the shaky isles, New Bloody Zealand, they celebrated their series win over Covid-19 and rugby came back.

Like reconnecting with a long lost friend, the personality you enjoyed so much was immediately present, even if the appearance of your old mate has changed just a smidgeon.

The isolation in New Zealand rugby has affected the players’ hair. Pink crew cuts, blonde cappuccino tie-dyes, zigzag side-shaved mullets and a scrumhalf with a combination of mashed lines, shaves, curls and colours that made his “melon” look like it would be more at home behind the oar of a Viking dragon boat than the Blues pack.

There was even a lineout jumper sporting Joni Mitchell’s style of cherry blonde, long flowing locks. All painted with more tattoos than the Edinburgh fringe festival.

I had forgotten how much I have missed the sight of grown men acting like children and running into each other, just for fun.

Or eight giants, grabbing each other’s jerseys and then crutch binding on the shorts of the man in front. Before jamming their heads between hips so their shoulders make cheek crushing contact with arse. Then to “crouch, bind, engage,” as all 16 heave over a piece of inflated plastic that is rolled, with a great deal of bias, into the mass of grunting behemoths.

How ridiculous we all are for taking this stuff so seriously.

Here, dear readers, I have a confronting confession to make. There were times during the isolation . . . now, this is hard to say . . . that I thought, “I could even watch a few box kicks.”

I immediately apologise for contemplating such a thought but I was desperate.

What my addled, rugby-depleted brain was really craving for was what happens after the kick. Some intoxicating counter attack.

Beauden stands out as bit of weirdo in the modern game. He has no visible tattoos and gives no indication he needs any exotic coiffure to reinforce his uniqueness. Barrett looks more like a successful accountant than a bad arse, rock star rugby player.

He does not do any choreographed celebrations after scoring a try. He is softly spoken and smiles a lot during games. He gives a distinct impression that he understands rugby is just a game and it’s supposed to be fun.

He is massively athletic but his biceps do not bulge unnaturally under his jersey from endless hours of pumping iron. He has obviously spent the majority of his training time refining his amazing skills set and that is why he is the best attacking player on the planet. Beauden Barrett was a joy to watch and Eden Park lapped it up.

At the “House of Pain” in the university city of Dunedin, Warren Gatland’s Waikato Chiefs went beautifully toe-to-toe with the Highlanders.

The town’s large student population are called “Scarfies.” They arrived in well-lubricated droves and gave the Highlanders their full voice. The intensity and noise was redlining, close to levels of Dunedin’s former home, the now sadly demolished Carisbrook Park. The modern Scarfies are less radical than their old time alumni.

When the Waratahs played Otago at Carisbrook in 1998, the then Scarfies were no less lubricated but they started bonfires on the terraces fuelled by bed mattresses. How they smuggled several mattresses into the ground before starting the fires remains one of rugby’s great mysteries.

All four teams celebrated the ending of a very dark time by throwing the ball around with great skill. Their creativity was rewarded with some wonderful tries as the scoreboards ebbed and flowed.

A celebration was had by all, including the referees.The Kiwi whistleblowers correctly enforced the law at the breakdown and the defensive offside line. For years defending players have been standing blatantly offside.

Players could stand offside behind the referee’s back as he looked to adjudicate the ruck because most referees refused to accept calls of offside via radios from assistant referees on the touchlines.

It would appear that the Neanderthal approach to officiating has evolved and the man with the whistle is at long last trusting the technology to communicate with the assistant’s wisdom regarding offside.

All of this is aimed to speed up the rucks and give that attack more time. There were far too many penalties but in time the players’ and coaches’ behaviours will change.

Why it has taken a pandemic to get this much needed “no brainer” change in rugby officiating remains a mystery right up there with the ancient Scarfies smuggling techniques.

Rugby is back baby. Round two and my armchair awaits.