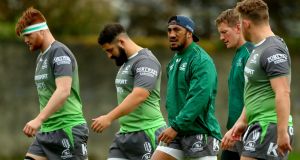 Robin Copeland will make his Connacht debut, Tom Farrell has recovered from illness, Bundee Aki makes his first start of the season alongside him in midfield as Andy Friend’s side host last season’s Guinness Pro14 beaten finalists in Galway.

Copeland came through 40 minutes in a Celtic Cup match last weekend to win a starting jersey. The Scarlets welcome back outhalf Rhys Patchell following a concussion but are without openside flanker James Davies, ruled out with a knee injury.

Coach Wayne PIvac admitted while some of the performance values were a little shy of where he would ideally like, he’s reasonably happy with two victories from their opening three matches. “We set a target, we wanted to be around the 10 point mark in the first three games and we’ve picked up 10.

“It could have easily been 13. We’re reasonably comfortable. We’ve said from day one that we wouldn’t be hitting our straps early in the season because of the time we gave the boys off and staggered return. The fluency in our game hasn’t quite been there but it’s about winning points and gathering momentum. Winning builds momentum.”

Connacht showed character in snatching a bonus point in Edinburgh last weekend but their discipline will have to improve appreciably as they gave away 15-penalties and a repeat performance would be manna from heaven for a place-kicker of Leigh Halfpenny’s ability.

There is no doubt the home side possesses the wherewithal to hurt teams with the mixture of power and pace in the backline but to maximise that threat requires a platform, something that the pack will be charged with providing.

There are interesting match-ups right across the pitch from the set piece to the confrontation between Aki and Hadleigh Parkes in the centre, two central characters for their team. Weather conditions will have a bearing on how the game unfolds with both teams hoping that it doesn’t prevent them from playing with their traditional width and fluency when at their best.

Eight wins from 29 matches between the teams underlines the task ahead of Connacht, but as Ulster demonstrated earlier in the season, it’s not an insurmountable hurdle with the requisite amount of grit and determination.