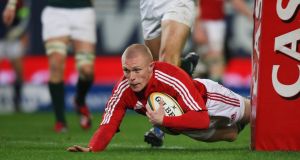 Keith Earls in action for the British and Irish Lions in 2009. The Munster man did not feature in the preceding Six Nations tournament for Ireland. Photograph: David Rogers/Getty Images

Keith Earls and Alan Quinlan share a unique distinction pertaining to the 2009 Lions tour to South Africa in that of the original 37-man squad selected by head coach Ian McGeechan, the two Irish players were the only ones not to play a single minute in the Six Nations Championship of that season.

The last Test match the Munster pair played prior to being named in McGeechan’s squad was actually the same one, against New Zealand in the 2008 November Test series; Earls won his second cap that day, Quinlan made the last of 27 appearances for his country.

Quinlan never boarded the plane for South Africa after he received a 12-week suspension, following the Heineken Cup semi-final between Leinster and Munster. And Jerry Flannery, Tomás O’Leary and Welsh centre Tom Shanklin picked up injuries that prevented them from travelling as well.

With a little under two weeks to go to the start of the 2017 Six Nations and a British and Irish Lions tour to New Zealand in the summer, it seemed germane to examine the relationship between the match-day squads on the opening weekends of the 2009 and 2013 tournament and weigh them against the original Lions squads selected to travel to South Africa and to Australia four years later.

The short answer, as the graphic illustrates, is that 84 per cent of the players that were subsequently selected to tour togged out on the opening weekend of the 2009 Six Nations. Six players (16 per cent) did not, but four of those – the aforementioned Earls and Quinlan didn’t play at all – would get some game time during the tournament. 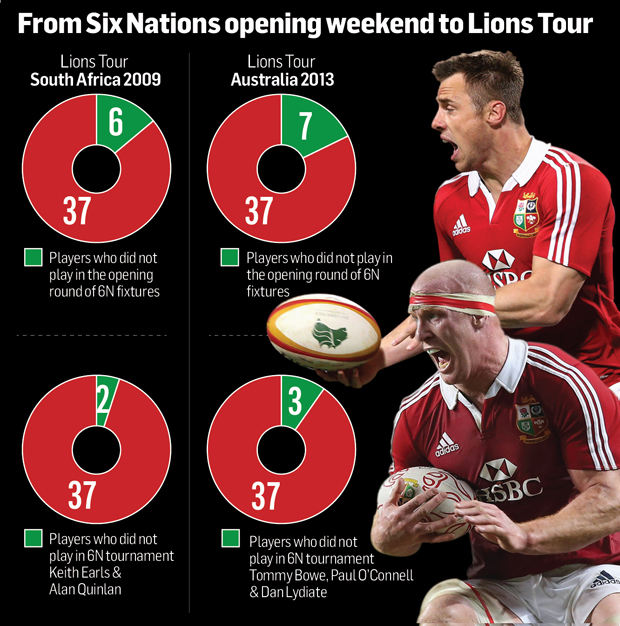 England wing Ugo Monye and secondrow Simon Shaw missed the first three rounds but were promoted on the penultimate weekend to play against France. Scotland prop Euan Murray was introduced in round three, while secondrow Nathan Hines came off the bench in the last two matches.

Indeed the Australian-born lock declined to play for his then club Perpignan in the French Top 14 semi-final to go on the Lions tour. Fortunately, he escaped to join Leinster that summer.

On the opening weekend of the 2013 Six Nations, 30 (81 per cent) of the subsequent original 37-man Lions touring party to Australia selected by Warren Gatland lined out; seven (19 per cent) were injured, three of whom – Ireland’s Paul O’Connell and Tommy Bowe and Wales flanker Dan Lydiate – did not play a single match in the tournament.

Welsh hooker Richard Hibbard and secondrow and new captain Alun Wyn Jones returned to the national side in week two and three respectively in that Six Nations; England centre Manu Tuilagi shrugged off injury to return in round two; and English flanker Tom Croft, who hadn’t played a Test match for 12 months, played against Wales on the final weekend of the tournament.

So on the last two Lions tours just five players from the original 74 did not play a minute of the preceding Six Nations Championships with a combined 13 not playing in the opening round of matches in those tournaments.

So come February 4th, the relevance of the team selections of Joe Schmidt (Ireland), Eddie Jones (England), Rob Howley (Wales) and Vern Cotter (Scotland) is an obvious barometer of current form in terms of players within those respective countries but also, predicated on the statistical evidence of the last two Lions tours, will offer the basis for four-fifths of the touring party that Gatland will announce in April.

Seán Cronin, Jared Payne, Billy and Mako Vunipola, Joe Marler, Chris Robshaw and WP Nel, to highlight a few, know that missing the Six Nations doesn’t necessarily have to mean having to forego a Lions tour.