Rugby statistics: Connacht not as clinical as last season 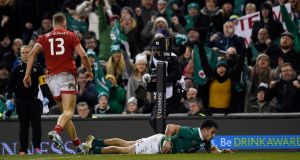 Ireland’s Tiernan O’Halloran scores a try against Canada. The Connacht fullback has made more metres (634) than any other player in the PRO12. Photograph: Clodagh Kilcoyne/Livepic/Reuters

The return of the Guinness Pro12 this weekend after a brief hiatus once again challenges the depth of the playing rosters in the various teams as Ireland, England, Scotland, Wales and Italy play their final round of Test matches in the November series.

With eight matches played – the exception being Zebre and Connacht who have completed seven fixtures because their game in Italy was abandoned due to weather – Leinster have opened a three-point gap at the top of the table over Munster.

The Ospreys and Glasgow Warriors are a further two points back with Ulster, the Scarlets and Cardiff also in the playoff mix.

As things stand there is an eight point gap to Edinburgh (14) but that might change when Connacht (11) play their match in hand.

Unfortunately though for the defending champions, there is quite a bit of climbing to be done to get back in contention for a semi-final place.

In examining the official Pro12 statistics – it should be noted they are skewed slightly based on varying game time – and taken at face value, there doesn’t seem to be much of a diminution in Connacht’s attacking prowess.

Fullback Tiernan O’Halloran has made more metres (634) than any other player and is a full 88 ahead of his closest pursuer, Dan Evans.

Team-mate Bundee Aki has carried more often (99) and is joint top of the ‘defenders beaten’ category (27), while a third Connacht player, wing Niyi Adeolokun (19) is also prominent in the latter grouping. 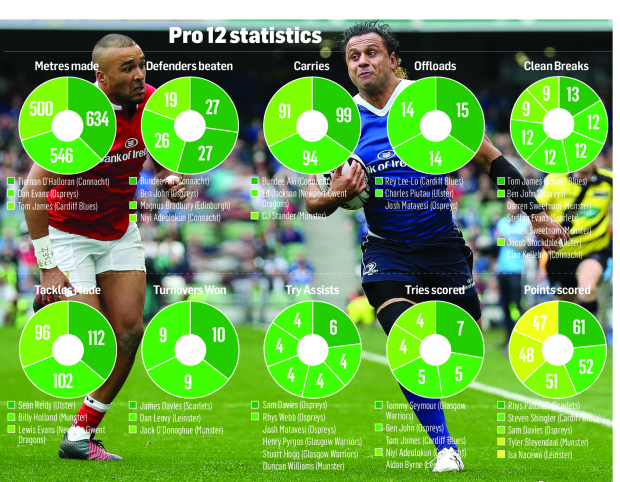 The pre-eminence of O’Halloran and Adeolokun (he is also near the top of the try scoring charts with four) from an attacking perspective also reinforces the supposition that Ireland coach Joe Schmidt picks form players.

The two Connacht backs played against Canada, O’Halloran starting at fullback and scoring a brace of tries, while Adeolokun made his debut off the bench.

Based on the figures a reasonable presumption would be that Pat Lam’s side should be spinning the numbers in the ‘points for’ category.

However lending temporary credence to the assertion from former British prime minister Benjamin Disraeli that “there are three kinds of lies; lies, damned lies, and statistics,” Connacht (111) are second last in terms of points scored, albeit with that game in hand.

What can be gleaned is the team is making line breaks and breaking down opposing defences but hasn’t been ruthless or clinical enough to convert those into points on the scoreboard. It is worth noting that Cian Kelleher (9) also features in the ‘clean breaks’ listing.

The next couple of weekends are pivotal for the western province with a couple of home matches against an improved Cardiff Blues and the bottom of the table side, Benetton Treviso.

From a defensive perspective, five teams have conceded more points than Connacht, even though just two clubs languish beneath them in the table.

Munster wing Darren Sweetnam, who was called into the extended Irish squad ahead of the November Test series, has also been racking up impressive numbers, making 12 clean breaks and three try assists.

New Zealand-born flanker Sean Reidy, who made his Ireland debut during the summer in South Africa, leads the tackle category (112), while Ruan Pienaar (633) has passed the ball more than any other player in the tournament so far.

Two eye-catching performances from a Leinster perspective are those of Adam Byrne and Dan Leavy.

Wing Byrne has scored four tries in two matches, making 141 metres and beating eight defenders. The 22-year-old, happily injury free, is delivering on his undoubted talent. Leavy, another to win his first cap against Canada, has nine turnovers in matches to date.

Whatever about the validity of the comparisons from a statistical bent across the various categories without the rider of individual game time, there is a corollary to be drawn between some of the Irish players, their form, and that fact that it has been recognised and acknowledged by Ireland coach Joe Schmidt.