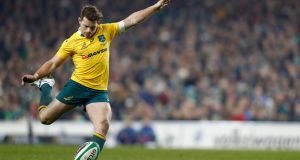 Ireland’s discipline in the two Tests against New Zealand and one against Australia was remarkable by any yardstick. They conceded just 11 penalties over the course of those three matches and 240 minutes of rugby against the number one and three sides in the world.

In contrast Joe Schmidt’s side forced New Zealand to cough up 12 penalties in Chicago, 14 in the second match at the Aviva Stadium a fortnight later and then squeezed 13 straight-arm transgressions from the Wallabies last Saturday at the same venue. That’s a 39-11 total in the profit-and-loss account, a lucrative dividend .

The unadulterated figures are impressive but when delving beneath the veneer, they are even more striking in some respects. In the aforementioned matches Ireland gave away just two penalties that cost them points. New Zealand outhalf Beauden Barrett kicked one after 20 minutes of the game in Chicago, while his Australian counterpart Bernard Foley landed a similar strike 60 minutes into the game last Saturday. That’s a paltry six points.

Without dealing in conjecture, specifically in regards to the complaints of New Zealand coach Steve Hansen and Australia’s Michael Cheika that Ireland should have been penalised more, Schmidt and his coaching team will have reviewed the penalties that Ireland conceded and noted that there were four in the opposing 22.

Jack McGrath was pinged for getting in front of Seán O’Brien (blocking), as they broke away from a lineout maul close to the New Zealand line in the game at the Aviva. The Irish loosehead was also penalised by Jérôme Garcès for not releasing in the same quadrant of the pitch, albeit he hadn’t much choice as the clearout wasn’t as vigorous as it might have been.

This might be considered pernickety when you consider the nature of the sport and the number of potential interpretations a referee can make at any breakdown and also in the context of the overall figure.

The majority of the 11 transgressions were for not releasing after the tackle so the obvious focus is to examine if the player lost his support or whether the clearout wasn’t as accurate as it might have been.

What must also be factored into any discussion is the calibre of the players Ireland were up against. Kieran Read, Sam Cane, Ardie Savea, Michael Hooper and David Pocock, to highlight just five, are formidable operators in poaching terms at rucks, so to limit them to less than a handful of chances to steal successfully was a tremendous achievement.

Ireland’s rivals in the Six Nations Championship will examine the November Test series footage minutely but in general terms, Vern Cotter (Scotland), Eddie Jones (England), Rob Howley (Wales), Conor O’Shea (Italy) and Guy Novès must have been impressed. They will also have compiled a list of reference points for pre-match chats with the respective referees in the tournament.

Many things are aspirational in sport but over those three games in the November series Schmidt got perhaps as close to perfection infringement-wise as is practicable. The bar has been set ridiculously high.

Munster cruise past Ospreys on a dead rubber day at Thomond 15:47
Real Steel sees off stablemate Footpad at Thurles 15:36
14-man Saracens on the brink of last-eight after edging Racing 92 15:50
Class is permanent for Lee Westwood as he claims Abu Dhabi title 13:43
Saracens accept Premiership relegation and issue apology 11:05
Here is your handy guide to sport on television this week