Johnny Sexton will be fit for opening Six Nations match

Speaking at the launch of the 2017 Six Nations, Ireland head coach Joe Schmidt has said that he is 'pretty confident' that Leinster outhalf Johnny Sexton will be fit for the start of the tournament. Video: Reuters 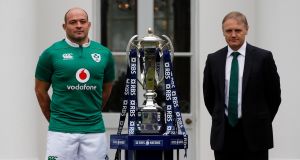 Joe Schmidt has declared that Johnny Sexton should be able to return to full training next week and thus be available to play in Ireland’s difficult opening RBS Six Nations game against Scotland in Murrayfield on Saturday week.

Sexton suffered a calf injury which forced his withdrawal barely 20 minutes into last Friday’s draw with Castres, and in just his second game back after an extended break to correct hamstring problems.

However, speaking at the tournament’s annual media launch in the Hurlingham Club in London today, the Irish coach said: “Johnny took a bruised calf in the game against Castres and it just tightened up. There’s not a lot of damage there; nothing’s showing up that’s overly significant. Johnny’s already starting back doing a little bit. We’d be confident he’ll be able to train next week and therefore be fully available to face Scotland.”

The only specialist out-half cover for Sexton is Paddy Jackson, but Schmidt revealed that the uncapped Rory Scannell, who has played primarily at centre for Munster although has played at ‘10’ in the past, will provide additional cover at half-time.

“At this stage the first time I saw Rory play for Dolphin against Belvedere he had a fantastic game at 10. There’s a big difference between that and Murrayfield but he would be the guy who could cover there. We’ve also got Paddy Jackson available obviously.”

As regards Ian Madigan, whose Bordeaux-Begles team play Clermont this Sunday before the Six Nations release comes into effect, Schmidt said: “With Ian, he could only have done those two first days with us. You only get that three-day opportunity with the (international) window. So it complicates that.”

“Ian had an injury earlier in the season so he hasn’t had a lot of rugby really,” added Schmidt. “I’ve kept in touch with Ian. He would slot back in pretty seamlessly for us, so that’s still something potentially that we could look at.”

The prognosis on Sean O’Brien, who has missed Leinster’s last two European games, was relatively encouraging according to Schmidt.

“He’s slightly further ahead than Johnny. We’re confident he may train before the end of the week fully, but he should train fully next week.”

1 Owen Doyle: Creeping professionalism of schools rugby a threat to the game
2 Champions Cup: Leinster will meet Saracens on Saturday evening
3 GAA officials and referees brace themselves as new rules kick in, and this time it's for real
4 Niall Quinn happy to step into the breach at FAI
5 Ole Gunnar Solskjær insists he is up to the challenge at United
Real news has value SUBSCRIBE