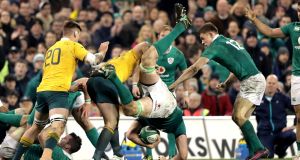 Ireland’s Devin Toner is dumped by Bernard Foley of Australia in the last few minutes at the Aviva Stadium. Photo: Morgan Treacy/Inpho

The courage that the Ireland team demonstrated to eke out a win in the most unpromising of circumstances has applied a gloss rather than a matt finish to the November test series.

Even the most ardent, one-eyed Ireland supporter might have started to question that blind faith when trailing 24-20 and fielding a backline that included a scrumhalf playing on the wing and an outhalf at fullback but from the depths of adversity there was a phoenix like quality to Ireland’s resurrection. They refused to lie down.

Victories over New Zealand, Canada and Australia against a single defeat to the All Blacks has ensured that Joe Schmidt’s charges have kicked on from the disappointment of final two tests during the summer tour to South Africa.

Granted, they achieved a historic first win over the Springboks in South Africa but there was a test series win in the offing. Still, Ireland became the first northern hemisphere team to beat South Africa, New Zealand and Australia in the same year since England achieved that feat in 2003.

There’s plenty of rugby to be played ahead of the Six Nations where individual form may waiver and injuries intervene but allowing for an even break in those regards, Ireland can approach the tournament with justifiable optimism based on a number of encouraging aspects to the team’s November performances.

Ireland’s set piece was outstanding, they scored eight tries in two of those matches and the mental strength and physical bravery was conspicuous even in defeat.

To concede a paltry 11 penalties over three test matches, including two games against the number one side in the world New Zealand (8), and the third ranked Australia (3), is littler short of staggering.

Ireland presented a good picture, as the rugby vernacular goes, to Mathieu Raynal, Jaco Peyper and Jerome Garces over the three games.

Coaches will traditionally offer a slightly jaundiced view when it comes to a referee’s interpretation and there are always going to be contentious decisions but it’s impossible to fluke what Ireland achieved, discipline wise, across 240-minutes of test rugby.

Schmidt set the parameters for his players and they adopted that culture. There are other contributory factors. Mervyn Murphy’s analysis of the referees that officiated the Irish matches forewarned the players and therefore they were forearmed but it still underlines massive self-control.

Ireland boasted huge tranches of possession in those matches. The rule of thumb is that the defending side tends to get penalised more, so on Saturday when the Aussies were on a three try rampage, Ireland still largely maintained that discipline.

There are obviously times when giving away a penalty is preferable to conceding a try but taken in an overall context, Ireland’s discipline was exemplary.

Drawing a line from the injury crisis that assailed Ireland ahead of their World Cup quarter-final against Argentina in Cardiff last year to the final whistle at the Aviva stadium on Saturday, there has been an obvious progression in depth to the playing roster.

To lose Rob Kearney, Andrew Trimble, Jared Payne, Robbie Henshaw and Jonathan Sexton before or during the game against Australia, have scrumhalf Kieran Marmion play on the wing – he was superb – and Joey Carbery at fullback with Garry Ringrose ostensibly out of position too at inside centre, encapsulates the progress made.

Watching Josh van der Flier’s performance against the Wallabies, the manner in which Tadgh Furlong has blossomed, Carbery’s precocious ability, the return of Peter O’Mahony and Iain Henderson, the introduction of eight new caps against Canada, all blended and fused into teams that won three of four matches in the four test November window.

Then there is Garry Ringrose whose progression has been stunning given the timeframe and demands placed on him to adapt. Ultan Dillane maturation and impact as a player, both starting and off the bench, is also praiseworthy. Paddy Jackson and Devin Toner have become leaders in different ways.

Joe Schmidt hasn’t exactly had an easy ride injury wise since before the start of the last Six Nations but from that adversarial starting point, he’s expanded the national squad in quality terms without any diminution in the high standards he demands of his coaching team and players. It’s a superb achievement.

During that time he’s managed, as he’s always done, to introduce a number of promising teenagers into Irish squad training and two of the latest, Jordan Larmour and Jack Kelly, made quite an impression.

Extending the parameters slightly to last summer, Joe Schmidt and his players will be aware that Ireland have watched some big leads in games against South Africa, New Zealand and Australia disappear alarmingly and while not always with catastrophic consequences in terms of the result, it does require addressing.

Injuries were a considerable mitigating factor but going forward the players will be keen to manage leads a little better, whether that’s retaining concentration or having the courage to sustain the attacking patterns that forged those leads rather than a sudden conservatism to hang onto them.

An occasional susceptibility to kicking poorly/aimlessly or just being a little lax in execution gives the players something to focus on going forward.

Defence coach Andy Farrell has had a relatively modest amount of time to work with the national side but the tweaks he’s made, particularly in terms of general line speed, double teaming in tackle and allowing individuals to make individual reads in shooting out of the line, are obvious and encouraging. Simon Zebo executed a perfect example of the latter against Michael Hooper on Saturday.

Ireland conceded 10 tries in the three games against New Zealand and Australia but when you look at the injury profile and the calibre of the opposition there is some mitigation and also the number of individual rather than system errors.

The All Blacks are rightly celebrated as the paragons of attacking virtue and their offloading game is a central tenet but it’s not a philosophy that can be easily mimicked if a team doesn’t have the requisite skill sets.

There is evidence that Irish players are looking to offload out of the tackle a little bit more and that’s certainly an area in which it is important to develop in looking at evolving a more rounded gameplan but there’s no point in doing so unless the players have the skill sets.

Generally Ireland break teams down by working through the phases, getting gain-lines and quick ball, until they can forge a mismatch in numbers. Schmidt has said, as have the players, that he’s not against offloading but it’s an outcome-based judgement. If you can’t throw it, don’t throw it.

The challenge for the players going into the Six Nations is to improve those skills to a point where execution matches endeavour.

Ireland’s 2017 summer two-test tour to Japan with a stop in New York to play the USA on the way out will be a very important benchmarking process ahead of the 2019 Rugby World Cup.

Injuries notwithstanding Joe Schmidt has little scope for experimentation between now and then given the twin track desire to win the Six Nations next year and the fact that the World Cup draw takes place in May 2017, with the world rankings acting as a seeding process.

Ireland will want to be in the top four in the world rankings to earn a number one seeding in a pool, so every results matters between now and then. Japan next summer though is probably the next opportunity he will have – somewhere between eight and 12 Irish players could be away on the Lions tour to New Zealand – to look at some of the countries outstanding young players.

A litany of injuries gave him an unexpected opportunity in the summer and autumn but next year he may have more choice in the matter. From a players’ perspective – the Irish Lions aside – it will be front and centre in their international aspirations.

1 Winds of change as Ireland name a refreshed team, picked on form
2 Gordon D’Arcy: If Farrell can tap into our self-worth, we’re all on a winner
3 Who is Caelan Doris? Meet Ireland’s newest rugby star
4 Ashleigh Barty now living up to all her earlier promise
5 Nike Vaporflys won’t be banned but regulations will tighten
Real news has value SUBSCRIBE

Seán Moran: Election fever a reminder of the GAA's fertile political soil 07:00
Navratilova apologises for breaking protocol with protest 06:50
Nike Vaporflys won’t be banned but regulations will tighten 06:39
Gordon D’Arcy: If Farrell can tap into our self-worth, we’re all on a winner 06:15
James McClean: ‘Abuse in the last few games has simmered right down’ 06:00
Here is your handy guide to sport on television this week