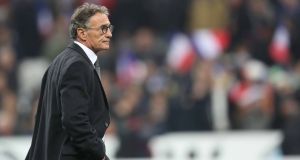 Guy Noves could be building a squad capable of competing with the best. Photograph: Billy Stickland/Inpho

Prospects: They have to travel to London and Dublin, which makes the prospect of them winning the championship considerably longer odds against. The halfback combination and a partner for Gael Fickou in midfield is the key to unlocking France’s potential, because there’s enough quality everywhere else. The Coach: Guy Noves has taken his time to put his imprimatur on the team but narrow defeats to the Wallabies (two points) and the All Blacks (five points) in the November test series, both matches in which they could and probably should have won, suggest that he is building a culture and a squad capable of competing with the best.

The Captain: Guilhem Guirado has taken over from Thierry Dusautoir and Pascal Pape and possesses the tough, nugget-like qualities displayed by former French captains and hookers like Daniel Dubroca and Philippe Dintrans, as well a more cerebral leader like Raphael Ibanez. He’s an excellent all-round player with tremendous stamina.

One to Watch: Scrumhalf Baptiste Serin has made quite an impression since his debut on last summer’s tour to Argentina. He came on in the first Test against the Pumas and started in a 27-0 triumph the following week. He won a further three caps in November as backup to the injured Maxime Machaneaud, and is quick, elusive, skilful and can placekick.

Prediction: Fourth. France under Noves only won their first away match during the summer tour to Argentina, when they drew the series 1-1, and given that they travel three times – they play in London and Dublin in the first and third round respectively – during the tournament it’s a statistic that needs to improve considerably. As things stand the final weekend, where they host Wales, could be a straight shootout for third place. France are heading in the right direction but this tournament could come a little soon in that development.

1 Seán O’Brien: Anger over my parents’ break-up never left me
2 2020 All-Ireland Senior Hurling Championship key dates
3 Here is your handy guide to sport on television this week
4 Hugo Keenan and Will Connors: The best of friends, the best of debuts
5 Ireland get the job done against Italy to keep alive Six Nations hopes
Real news has value SUBSCRIBE

Here is your handy guide to sport on television this week 17:01
Southampton stop Everton in their tracks at St Mary’s 17:11
Inspirational Burke points the way as Dublin clear opening hurdle 16:35
A changing of the seasons as Minella Indo lines up at Wexford 15:40
Lewis Hamilton makes history in Portugal with 92nd GP win 15:45
Crossword Get access to over 6,000 interactive crosswords