Opening fixture against Ireland should set tone for the Scots’ tournament 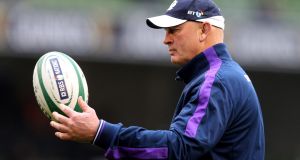 Vern Cotter: will leave Scotland in a better position than when he took over. Photograph: Ryan Byrne/Inpho 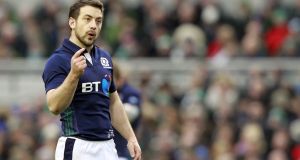 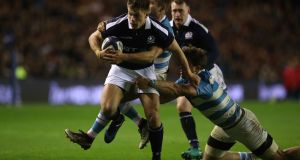 Huw Jones: could have a bright future with Scotland, and even the Lions. Photograph: Ian MacNicol/Getty

The players must push to the periphery the fact that their coach is leaving at the end of the season and concentrate on the matters in hand. Last season, they lost narrowly at home to England (15-9) and away to Wales (27-23), while beating France and Italy. It should also be remembered that Ireland scored three tries in a 10-point win while the Scots were a man down. Scotland have more depth now than in previous seasons.

Greig Laidlaw is a sharp, tactically astute presence at the breakdown and also a very capable place-kicker from about 45 metres in. He provides his team with intelligent direction and has a good feel for space on the fringes and in behind opposing teams.

Huw Jones was born in Edinburgh, educated at Millfield in Somerset and currently plays for the Stormers in South Africa. He was first capped on Scotland’s summer tour to Japan, and in his first start the outside centre scored a brace of tries against Australia in November. He could be an outside bet for the Lions tour.

Fifth. They could do a great deal better than that, particularly if they can beat Ireland in the opening fixture, because in some respects that may set the tone for the tournament. The next three games are all tough, with two away from home, so an opening-day defeat would leave them vulnerable. A win, however, and they have the momentum to go forward.