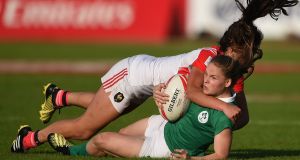 Nicole Cronin of Ireland is tackled by Mathilde Coutouly of France during day one of the Emirates Dubai Rugby Sevens in Dubai, United Arab Emirates. Photo: Tom Dulat/Getty Images

There is a school of thought that suggests that rugby’s siblings, the Sevens and 15-a-side, are not interchangeable pathways in developmental terms when it comes to enjoying a professional career in the latter form of the sport.

There is a certain validity to the argument that the minutiae of switching between disciplines at the highest level is not as straightforward as it appears but they are no means exclusive pursuits with a negligible crossover, based on the empirical evidence of numerous players that have done so successfully.

Sevens does have a role, and a significant one at that, to play in the development phase of young players in terms of skill sets in particular. The basic tenets of the Sevens game translate in a practical manner to the 15-a-side game; tackling, defending, passing, lines and angles of running and offloading. The abbreviated version of the game is also an ideal vehicle to introduce young boys and girls to rugby at a primary school age.

There is the opportunity for greater and more regular involvement in a Sevens match and that has huge appeal along with the aerobic benefits. More space, less bodies also helps to mitigate the physical or collision side of the sport.

The IRFU ignored Sevens for most of the modern professional era but that’s no longer the case and under the direction of Anthony Eddy are gradually building a profile on the international circuit with the Women’s side already competing at the highest grade and the men’s looking to break into that echelon.

Last weekend in Dubai the Ireland Women’s Sevens team won the Challenge Cup beating the USA and Spain, both countries ranked higher in the Women’s Sevens circuit while the Ireland Men’s team finished fourth in the Dubai Invitational, a second tier tournament.

The graphic illustrates how a Sevens game involves a greater individual input across the core skills. The comparison used is taken from a player involved in four, 20-minute matches, in the Rugby Europe Sevens Under-18 tournament as against a player participating in a single match in the 15-a-side U-18 interprovincial championship.

Allowances have to be made based on the contrasting demands of the two games but the figures reflect a greater fundamental participation in Sevens and also that many of the core skills receive a far more rigorous examination.

The second part of the graphic demonstrates the value of young players playing Sevens for a season and then translating that development into the XV man game. It’s not a case of ‘getting stuck’ playing Sevens as if it is some sort of cul-de-sac.

The septet of players listed all played for the Ireland Sevens team last season – Leinster’s Tom Daly was the captain – and with the exception of Adam Byrne, non played a senior competitive (not friendly) match for their respective provinces.

The contrast with this season is appreciable. Rory O’Loughlin, has been one of Leinster’s outstanding players in the campaign to date, racking up 270-minutes in just three months, September to November, as opposed to none in 2015-2016. Young Munster centre Dan Goggin (256), UCD wing Barry Daly (200) and Garryowen wing-cum-fullback Alex Wootton (130) are others but the most eye catching contribution if that of Byrne.

He exceeded the number of minutes playing for Leinster last season after just three months of the current one and already in December has added to the game time and try tally. The same can be said of Wootton and Daly in both respects.

And one final statistic that’s worth noting involves the number of players who played at the 2015 Rugby World Cup having previously played Sevens at the highest level for their country.