Schmidt expected to clarify his view on the Carbery conundrum 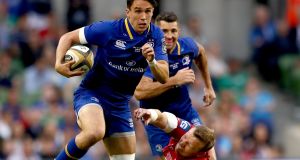 Leinster’s Joey Carbery: “Obviously playing in one position the whole time would make me better in that position.” Photograph: James Crombie/Inpho

Clarification about Joey Carbery’s whereabouts next season is expected from Joe Schmidt at the Ireland coach’s first media conference since Twickenham on March 17th.

Jackson’s contract was revoked by the IRFU, following disciplinary proceedings in April, after Jackson and Stuart Olding had been cleared of rape charges. Jackson remains without a club but French side Brive, coached by Jeremy Davidson, signed Olding this week.

Carbery, Byrne and Jackson are all represented by Esportif rugby agent Ryan Constable.

It is believed Byrne is staying at Leinster but after Carbery turned down a 12-month loan deal in Belfast, the 22-year-old recently met Munster coach Johann van Graan.

With 16 months to go until the World Cup in Japan, Schmidt is keen to avoid a repeat of the Ian Madigan situation at the 2015 tournament when the now Bristol outhalf had primarily played inside centre, fullback or off the bench when asked to fill the void left by injury to Johnny Sexton for the quarter-final defeat to Argentina.

Leinster have repeatedly selected Carbery at fullback this past season, except for the defeat to Treviso and some sparks of brilliance off the bench at outhalf, particularly during Saturday’s Pro14 final.

For Ireland, at 10, Carbery has been stunning and awful in equal measure. In November 2016 he closed out the historic victory over the All Blacks in Chicago only to produce perhaps his worst game as a professional against the US Eagles last June (Jackson missed both of these games as he could not enter the United States). Come November 2017, Carbery wonderfully picked open the Fijian defence before fracturing his forearm.

“Obviously playing in one position the whole time would make me better in that position but, at the moment, learning the different ways of different positions all helps in the end,” he said in March. “I’ve said this before as a 10 playing at 15 when attacking you want to catch out the 15, see where his weaknesses are, so playing 15 I learn what’s hard to defend and what’s hard to attack.”

This may suit his development but with Jackson and Madigan out of the equation, Schmidt’s Ireland tour Australia with Byrne and Carbery as back-up outhalves. Ideally, for Ireland but not Leinster, with Stuart Lancaster repeatedly stating he wants to keep coaching Carbery, they will not be competing for the same provincial jersey next season.

Munster have their own issues, with the continued influx of foreign talent – there were 17 non-Munster produced players on their first-team roster this season (six from Leinster, five South Africans, three via England, two New Zealanders and Chris Farrell is an Ulster man) – prompting Paul O’Connell to voice concerns about the long-term direction and planning of the province.

“I’m not a massive fan of players moving around the provinces,” O’Connell told The Irish Examiner. “I think it’s just a short-term fix for Munster if players come here.

“We have to put in a production system underneath from the club game and from the schools game to match other provinces. Maybe we won’t ever be as good as Leinster at it but we do need to try something.

O’Connell, part of the Ireland U-20s coaching ticket at the World Cup in France, has reportedly cut ties with the Munster academy but did accept that issues at outhalf needing solving.

“It is a position where we have struggled. We have had players that have played really well from time to time. Like Ian Keatley. Tyler [Bleyendaal], when he has been fit, has played really well there but we haven’t had the consistency that other teams have had, like Johnny Sexton at Leinster.

“Munster just need to find someone that can play at a really consistent level. Whether that is the guys they already have or whether it’s someone new, that’s up to the coaches to figure out.

“Munster aren’t that far behind. They have been in two Champions Cup semi-finals in the last two years. Munster are not where they were at 10 or 15 years ago but I do think Leinster doing so well has exacerbated things.

“I don’t think we are producing the players that we used to produce. It’s a real shame to think that Munster were so strong in 2006 and 2008 and we didn’t capitalise on it.”