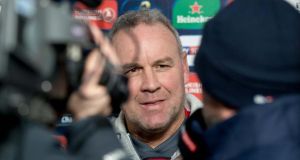 Wayne Pivac: “We have got a pretty good environment here now and a pretty good culture. The players enjoy coming to work and enjoy each other’s company.” Photograph: Morgan Treacy/Inpho

Amongst a media huddle with Jonathan Davies after the first Lions Test against New Zealand in Eden Park, the Welsh centre was asked if he’d ever been involved in a better try than the one finished off by Sean O’Brien, in which Davies handled twice including the try-scoring offload.

“You don’t watch much of the Scarlets, do you?” was Davies’ reply.

If there has been one try which sums up what the Scarlets are about on their march to a first European Cup quarter-final since 2007, it was the one scored by the ex-Leinster, Munster-bound lock Tadhg Beirne in their stunning round five win away to Bath on a muddy, wet, murky Friday night last January.

Without the injured Leigh Halpfenny, the Scarlets decided to run the ball from pretty much anywhere, and this was typified by the move ten minutes in. It began with a Rhys Patchell offload inside his own 22 and from there the ball travelled through 13 pairs of hands as Scott Williams spread the play with a huge miss pass, before Aaron Shingler broke the line and Paul Asquith popped the ball off the deck to Beirne, who stepped off his right foot past Anthony Watson to score. Three more superb tries had secured a bonus point and a 29-3 lead by the 53rd minute.

This epitomised what the Scarlets have become under their Kiwi head coach Wayne Pivac.

After losing their opening two pool games last October, a fourth successive victory, this time over Toulon, in round six ensured they became the first Welsh region to reach the knockout stages since Cardiff Blues in 2012. An equally gritty 29-17 quarter-final win over La Rochelle earned them a first semi-final since 2007.

This follows last season’s Pro12 semi-final win against Leinster at the RDS, before they beat Munster 46-22 in the final at the Aviva Stadium.

Now they loom into Leinster’s view again in next Saturday’s European Champions Cup semi-final at the Aviva Stadium and, as last season showed, they are a momentum team whose running game becomes more effective in end of season conditions.

Pivac did not have an especially notable playing career with the North Harbour provincial team, and seems to have drawn as much of his man management style from his time as a constable at the Takapuna police station on Auckland’s North Shore.

“I had some tough jobs in the police,” he once recalled. “I carried a body bag and had to pick up pieces of a person who had been obliterated in a car crash. I saw some things you don’t normally expect to see, especially at that age.”

“Once you’ve gone into the family home of people you don’t know to tell them their teenage son or daughter is not coming home because they’ve just been killed in a car accident, it makes you stronger. It means you can deal quite comfortably with some of the tricky situations being a rugby coach can throw at you. When you’ve done something like that, telling a player he’s been dropped is not that difficult.”

Pivac first began coaching at club level with Takapuna, spent two seasons with North Harbour’s second XV and then coached Northland, the province his father represented. Under Pivac, Northland won the NPC Second Division in 1997 and promotion to the First Division.

He then guided Auckland to win the NPC in 2002 and again in 2003, as well as the Ranfurly Shield, and was voted New Zealand Rugby Union Coach of the Year in 2003.

He became Fiji’s head coach in 2004 and after helping them win the Pacific Tri-Nations in his first year increasingly ran into difficulties securing the release of leading players. He stepped down in January 2007, eight months before the World Cup, citing family reasons.

He returned home to coach North Harbour, and then Auckland again, before being lured to the Scarlets in the summer of 2014 by Simon Easterby, citing the latter’s willingness to hop on a plane to New Zealand to interview him as a major reason for his decision.

He arrived in June 2014, whereupon Easterby took up the role of Ireland forwards coach, and that August Pivac was promoted to head coach. His first season saw the Scarlets finish sixth in the Pro12 before a modest climb to fifth in 2014-15.

He has since admitted: “There were some players that wanted me out, but I said to myself ‘hang on, there’s a job to be done here’. We knew we had to ruffle some feathers, manage expectations, a few people had to move on and you’ve seen the results.”

Pivac doesn’t appear to do a huge amount of the hands-on coaching, although is a good judge of assistant coaches and has the ability to delegate.

Much of the attack work is overseen by Stephen Jones, who had a year working with Dai Young at Wasps before returning to the Scarlets in 2015. When they were beating the Dragons over Christmas, Ken Owens was interviewed at half-time and asked what they’d be looking for in the second-half. “We’ll see what Stephen says,” replied Owens.

Ioan Cunningham is the forwards coach, and their all-Welsh front-row of Rob Evans (who has almost become a playmaker), Owens (who was immense in the quarter-final against La Rochelle) and Samson Lee, backed by David Bulbring and Beirne in the second row, have made the Scarlets more formidable up front. Their back row of Aaron Shingler, James Davies and John Barclay are all in form and this week Sam Warburton described the athletic, skilful Shingler as the player of the season in Wales. They have a proper pack now, and can match sides physically.

Accordingly, as they showed in the wins over Toulon and La Rochelle, when the Scarlets were not as their most polished, they dug in defensively before stealthily taking their chances.

Pivac clearly has a clear vision of how he wants the game to be played and how to build what he calls a “winning culture”. He is also an adept man manager, and a good selector, and one of his key strengths is identifying the right players to sign.

Fellow New Zealanders Hadleigh Parkes and Johnny McNicholl have made a massive impact, as has Beirne and 24-year-old Australian winger Paul Asquith, while the South Africans Bulbring and Werner Kruger have been valuable additions to the squad.

If the Scarlets are to continue being bulk suppliers to Wales, and fulfil Pivac’s stated ambition of being knock-out contenders in both the Pro14 and the European Cup, they need players who are available throughout the season.

To that end, this week the Scarlets confirmed the signing of exciting 27-year-old Cheetahs full-back Clayton Blommetjies, in addition to his dynamic 28-year-old back-row team-mate Uzair Cassiem and the Hurricanes back five forward Blade Thomson.

Pivac said that the Scarlets are not looking to sign ‘robots’, explaining: “We know the way we want to play the game. We know the positional requirements when we go looking for players. We know the skill sets that we are looking for.

“Then it’s a matter of meeting the people. We do a lot of homework in terms of what they are like away from the rugby field. That interests us as well, as to what type of people they are, because we have got a pretty good environment here now and a pretty good culture. The players enjoy coming to work and enjoy each other’s company. That’s an important part of it. It’s not just rugby ability, it’s the person as well. Hugely so.”

“The team dynamics that we look for here, we don’t want stereotype rugby players. We don’t want robots. It’s not paint by numbers at the Scarlets. It’s very much backing the players’ skills. We have a game plan and within that there’s a lot of freedom to play what’s in front of you once we have done the hard work. So we need X-Factor players and people that can make good decisions under pressure and generally solid citizens do that more often than not.”

“Both the Cheetahs boys are good people and we look forward to welcoming them into the fold at the start of next season. They are hard workers. They are family men and they are solid citizens. They will bring something to this group which will be slightly different, coming from a different cultural background, which I embrace.”

In all of this, the Scarlets are punching above their financial weight. Akin to the Irish provinces, their wage bill is complicated by central contracts, but it is reckoned to be around £5.5 million.

Refreshingly, Pivac has made no secret of his ultimate ambition to coach the All Blacks, and recently revealed that he’d had informal talks with the Welsh RFU over the possibility of succeeding Warren Gatland as Welsh coach after next year’s World Cup, something he would be “very interested” in doing.

He is proving himself the stand-out candidate.