Controversial Goosen returns to the fray for Munster clash 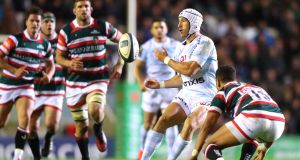 John Goosen: will play for Montpellier next season but will be in the Cheetahs side to take on Munster in the PRO14 clash in South Africa. Photograph: James Crombie/Inpho

Johan Goosen will play his first match since he “retired” in January 2017 while on the playing roster of Racing 92, at a time when he had signed a contract that would have kept him at the Paris club until 2020.

Just 24-years-old at the time and the reigning French Top 14 Player of the Year, he said that he wanted to quit the sport for “rural life” back in South Africa and agreed to become commercial director at a saddle-horse stud farm.

Racing were understandably not impressed and launched civil and criminal actions against the player who they believed had engineered a set of circumstances by retiring and taking up a job outside the sport that would make his contract null and void. Goosen subsequently decided to come out of retirement and agreed to join Montpellier next season; the upshot is that Montpellier owner Mohed Altrad is reputed to have paid Racing €1.5 million to buy out the player’s contract.

Last month Goosen, capped 13-time by the Springboks, started training with the Cheetahs and has been named in their team to take on Munster in the Guinness Pro14.

Former Munster director of rugby and current South Africa coach Rassie Erasmus is expected to attend the game as he has been given the scope by his bosses to petition for an overseas player with less than 30 Springbok caps to play for the national side outside a World Cup year on a case by case basis.

Goosen will certainly add value to the Cheetahs side as they bid to chase down Munster for second place in the conference.

Johan van Graan has made nine changes in personnel to the team that ran in six tries in victory over the Southern Kings in the first of two games in South Africa. Simon Zebo comes in at fullback, Andrew Conway and Darren Sweetnam on the wings and Sammy Arnold in midfield with Dan Goggin switching to inside centre.

Up front Brian Scott makes his first start of the season at loosehead prop, Billy Holland replaces Jean Kleyn in the second row and Munster captain Peter O’Mahony returns to an all-new back row along with Robin Copeland at number eight and Jack O’Donoghue.

Conor Murray has been named on a very strong bench that also includes centre Rory Scannell who had a superb match in the win over the Southern Kings.

The Cheetahs have only lost one match at home this season. But given the depth and quality of Munster’s match-day squad, and provided they hit their straps a little bit quicker than last weekend, they have the wherewithal to grab a second win in South Africa, although the home side are one-point favourites with the bookmakers.