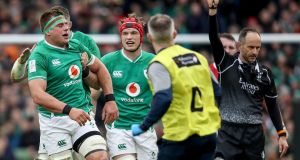 CJ Stander forces a turnover for Ireland in their win over wales. Photograph: Dan Sheridan/Inpho

Andrew Conway made a valid point recently about the external perception of Ireland’s performances in the opening two matches of the Six Nations Championship, particularly in the media. He suggested that the equilibrium of the team environment contrasted with the yo-yoing appraisals post Scotland (doom and gloom) and Wales (ebullient) matches.

He wasn’t arguing that the Scottish display didn’t merit criticism, but that the coaches and players were confident they could address the issues required to make incremental improvements from the first match to the second, something that was borne out in the Irish display last weekend.

The narrative in discussing the differences in performance terms between the Scotland and Wales games incorporated many aspects but one which was consistently highlighted to provide evidence of progression was the speed of Ireland’s ruck ball.

So armed with the official Six Nations Championship statistics, powered by AWS, this column took a peak at comparables in breakdown terms between the two games. The metrics to determine the speed of ruck ball fall into the three measurement categories, 0-3 seconds (fast), 3-6 seconds (not ideal but usable) and greater than six seconds (slow or very slow).

As the graphic illustrates, Ireland produced marginally quicker ruck ball against Scotland (62 per cent, 0-3 seconds) as opposed to the Wales (60 per cent) match, but at the other end of the scale this was reversed with the Welsh managing to slow down Irish possession more often, 11 per cent as against seven in the Scottish game.

Drilling down a little further, the Scotland game saw James Ryan and Iain Henderson, along with prop Tadhg Furlong, get to more rucks in which Ireland were in possession with the two Irish secondrows and flanker Peter O’Mahony among the first three players to arrive more often than any of their team-mates.

One or two other statistics jump out. In the four minutes that he was on the pitch before being forced off with concussion, Caelan Doris was in the first three Irish players to arrive to a Scottish ruck on 10 occasions, a staggering tally. The fact that scrumhalf Conor Murray and wing Jacob Stockdale were second and third in that category highlighted the Scots approach generally speaking; they adopted a gameplan that favoured the wider channels when compared to Wales.

Against Wales the Irish backrow were the dominant presence at the breakdown on both sides of the ball, number eight CJ Stander heading the way in every metric but it was a shift in his role that is most striking. He carried 17 times for 73 metres against Scotland as opposed to nine for 30 metres against Wales. His tackle numbers also followed a similar pattern, a higher figure in the opening match.

Stander was brilliant at the breakdown in both games, his ability to survive the clearing out process underlining his strength and determination. Instead of using him as a primary carrier he’s been redirected where possible to chasing poaching opportunities, an area in which he has excelled with two steals against Scotland and three in the Welsh match.

Wales were narrower in orientation in attack for the most part and this played nicely into the hands of the Irish backrow, with a nod to the contribution of Henderson and hooker Rob Herring in this facet of the game. What was less apparent to the naked eye across both games was Henderson’s contribution at the breakdown; consistently high numbers over 67 and 66 minutes respectively underline not only the quantity but the quality of his work.

The Ulster captain also threw in a couple of lineout steals in the Scotland game and also a turnover at a ruck in the Scotland. The stats support the assertion that O’Mahony and van der Flier racked up impressive figures across a number of indices with the Leinster flanker (according to OptaJonny stats) “the first man to 41 of the 65 rucks he’s hit in the Six Nations this year, more than any player.”

He is also one of only two Irish players – the other is Jacob Stockdale – to make or beat the gain-line, 100 per cent of the time, across the Scots and Welsh games.

So what can be gleaned when sifting through the information regarding the breakdown over the first two Six Nations matches?

Well Ireland’s ruck ball wasn’t quicker against Wales but in tweaking the roles of individuals within team parameters, the additional time together and the nature of the opposition’s play, Andy Farrell’s side possessed a sharper cutting edge the last day.

Returning to Conway for one final statistic, the Ireland right wing made three clean breaks last weekend, which as it transpired, was as many as the Welsh team combined.