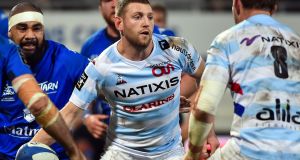 Finn Russell: he is a talented if mercurial performer. Photograph: Remy Gabalda/AFP via Getty Images

Finn Russell’s absence from the Scotland team to face Ireland at the Aviva stadium on foot of a disciplinary issue denies the match a talented if mercurial performer. At his best the 27-year-old possesses the ability to rip defences to shreds. His vision, range of passing and nuanced kicking game brings a razor sharp cutting edge to his teams’ attacking patterns for both Racing 92 and Scotland.

There is a flip side occasionally, especially when direct pressure is brought to bear, in that he can make some rash choices, while the requirement to hide him a little in defence complicates matters.

Yet on balance his playing ledger is positive, arguably a little more consistently at the Parisian club.

Russell was in line to win a 50th cap for Scotland in Dublin. Unusually he started all 49 tests at outhalf apart from a game against Argentina, where he played in the centre, but on the basis of electing to leave the Scotland squad environment and return to Paris – he played for Racing 92 last weekend – he may miss more than the Ireland match.

The rights and wrongs of his omission are subservient to the impact that his absence will have on Gregor Townsend’s team at the weekend. It will either knit the playing group or cast a pall.

Scotland have played 67 tests since Russell made his debut against the USA in Houston on July 7th, 2014. He played in 49 of those matches, scoring 144 points from six tries, 33 conversions and 16 penalties in a period in which the Scots won 20, lost 18 and drew one, which gives a win percentage of 58.16.

Without him the bald figures are eight wins and 10 defeats in 18 matches (44.44 per cent). Five of those victories came against Tier 2 nations, Japan (twice), Georgia, Russia and Canada, the other three against Argentina (twice) and Italy.

Scotland used five different outhalves in his absence and only one, Glasgow pivot Ruaridh Jackson, has a winning record, the team winning all three matches in which he wore the number 10 jersey.

Duncan Weir, who was called into the Scotland squad when Russell departed for Paris, played in five of those first seven matches when the latter wasn’t available. Weir’s record was two wins and three defeats, amassing 20 points.

South African-born Greig Tonks – he played for Northampton Saints, Edinburgh and London Irish – was outhalf when the Scots lost 28-22 to Ireland at Murrayfield in a World Cup warm-up match in August 2015.

Glasgow’s Peter Horne, when entrusted with the outhalf role, was on the losing side on all three occasions, against Italy (World Cup warm-up, 2015), against Fiji in Suva (June, 2017) and a Six Nations Championship game against France at the Stade de France last season.

Townsend’s preferred choice and the player to whom he has turned most often in Russell’s absence is 23-year-old Adam Hastings, the son of former Lions and Scotland fullback Gavin.

Russell didn’t travel on the summer tour in 2018, and Hastings wore the 10 jersey in a defeat to the USA and a victory over Argentina in Resistencia. Later that year he chipped in with five points against Wales at the Principality stadium in November.

He played a World Cup warm-up match against France last year and then two World Cup matches in Japan, the victories over Georgia and Russia; in the latter game he kicked eight from nine conversions.

In the six matches he has been on the winning side on three occasions, all against Tier 2 nations, but is not a surprise that Townsend has handed the 10 jersey for Saturday’s game to the talented young outhalf.

He started his professional career with Bath before signing a contract with the Glasgow Warriors (2017) for whom he plays; coincidentally he succeeded Russell as first choice with the Scottish club after the latter moved to Paris.

One other statistic that’s germane to Russell’s absence from Saturday’s game at the Aviva stadium is that he had a 20 per cent win record against Ireland, the only victory coming in a Six Nations game at Murrayfield in 2017; in the other four matches between the countries in which Russell has played Ireland have triumphed.

The record is not as shabby as it appears when factoring in that Scotland have only beaten Ireland on three occasions in the Six Nations since 2000.

Since Russell’s debut in 2014 he’s only missed two tests against Ireland, both of those games ended in defeat for the Scots, a World Cup warm-up game (2015) and the 2017 Six Nations clash between the countries.

Andy Farrell’s team would like to continue that sequence.