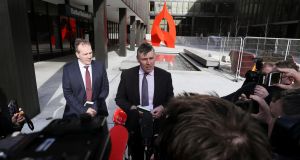 The IRFU and the Six Nations face a host of logistical difficulties in trying to reschedule the tournament’s three Ireland-Italy games at men’s, women’s and under-20 levels.

The union acceded to the Government’s request to have all three matches, scheduled for the weekend after next, called off due to public health concerns in relation to the coronavirus.

Minister for Health, Simon Harris, had indicated his desire to have the game called off on Tuesday evening without consulting the IRFU. He then met with members of the union for an hour on Wednesday, after which the CEO Philip Browne confirmed the games had been called off following “a positive meeting with Minister Harris and his advisors today”.

An estimated 2,000 to 2,500 Italian supporters were scheduled to attend the game at the Aviva Stadium next Saturday week, which is in addition to the estimated 1,000 people who travel to Ireland each week from Italy and continue to do so.

In any case, the postponement of the match will not of itself prevent any Italian supporters travelling to Dublin, not least as they have booked their flights and accommodation. All flights between Ireland and Italy are continuing as scheduled.

While these games are the only sporting casualties to date, the Government has also indicated that the St Patrick’s Day parade will proceed as normal. Organisers of last year’s event estimated that over 100,000 visitors from countries all over the world were among the half-million who lined the streets of Dublin.

A Six Nations game in Dublin is estimated to generate €30 million-plus for the economy and even though much of the union’s financial losses will be covered by insurance, both the IRFU and the Six Nations will be keen to have the three games rescheduled.

The last time both the IRFU and the Six Nations were left in a similar quandary was in 2001, when the outbreak of the foot and mouth disease in Britain led to the postponement of Ireland’s games away to Scotland and Wales, and at home to England, and indeed the cancellation of that year’s Cheltenham Festival.

Ireland’s three games were all re-arranged for later in the calendar year at the start of the 2001-02 season, and the likelihood is that a similar solution may be found this time. However, there are significant differences between now and then in a more congested rugby calendar, while there also remain doubts over other Six Nations games on the final weekend – ie France-Ireland and Italy-England. And the greater threat hangs over the remainder of the Guinness Pro 14 given the ongoing doubts over games involving the Italian clubs Benetton and Zebre in this ever-changing narrative.

There is no blank weekend for the remainder of this season which, due to the Rugby World Cup, runs until June 20th when the Pro 14 final is scheduled to be played in Cardiff, after which the Irish senior squad embark on a two-week tour to Australia.

What’s more, in addition to re-organising television coverage there is also the issue of gaining access to the Aviva Stadium, because that is pretty much in lockdown from May 1st for the European Championships in football – which, of course, would seem to carry an even greater risk with regard to the coronavirus given it is a multi-city event for the first time.

Furthermore if, say, the Italy-England and/or France-Ireland games are called off, the chances of finishing the 2020 Six Nations this season will be even more unlikely.

Whatever about the men’s fixture with Italy, there are seeding points attached to the women’s fixture which affect who Ireland play in round one of the Women’s World Cup qualifiers next September, the finals for which will take place in New Zealand next year.

As for the Under-20’s game, it could potentially be worked into, or before, the Under-20 World Rugby Championships, which begin at the end of June. Significantly, though, as that tournament is scheduled to take place in Calvisano and Viadana (both of which are in the region of Lombardy) and Verona, also in northern Italy, there must be serious doubts about it going ahead.

Back in 2001-02, the inaugural season of the Celtic League, Leinster and Munster only had to play nine and eight matches respectively to reach the final, which was in mid-December, so working in Ireland’s three games was much simpler logistically.

However, the bigger threat hangs over the completion of the Pro14, given the Benetton-Ulster and Zebre-Ospreys games last weekend were cancelled and another eight rounds of the regular season remain before the playoffs.

The likelihood is that it will require considerable time before the three postponed Ireland-Italy games can be rescheduled, if at all. The last time the tournament was not completed occurred in 1972, when Scotland and Wales refused to travel to Dublin due to the Troubles, after Ireland had won away to France and England.

Despite the cancellation of the Italian game, the Irish squad will go ahead with its two-day camp in Dublin on Thursday and Friday, when there is a public session in Donnybrook. Management and leading players are meeting on Wednesday evening to discuss how to plan next week’s itinerary in light of the Italian game being called off.