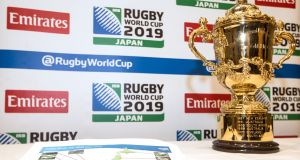 The Rugby World Cup in a Dublin hotel at an announcement of match venues. Photograph: James Crombie/Inpho

RTÉ and TV3 will be the protagonists in a bidding war if Eir Sport decides to sell on a portion of its exclusive Irish broadcast rights to the 2019 Rugby World Cup in Japan. If those circumstances pertain, it is expected to come to market in the very near future.

Under a list of sporting events designated by the government, Ireland rugby matches in the Rugby World Cup have to be free-to-air. Eir Sport can retain the exclusive rights by making them available in that format or, as is more likely, sell off part of their rights package to either RTÉ or TV3. That could include somewhere between eight and 12 matches, including other tournament games and knockout matches.

TV3 was the main Irish broadcaster for the 2015 Rugby World Cup in England and then outbid RTÉ for the rights to the Six Nations Championship matches from 2018-2021, a decision that was prescient in timing terms as in the broadcast’s debut season Joe Schmidt’s Ireland side won a Grand Slam.