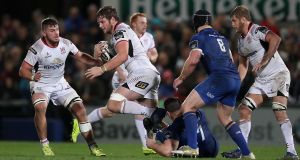 Ulster’s Champions Cup campaign stands at a crossroads and this game will have a pivotal impact on the direction it takes.

There are a couple of performance issues that are in need of urgent address, the brittle nature at times of Ulster’s defence and a more heavyweight contribution is required from Ulster’s tight five. Defence relies on a hard-nosed attitude and insatiable appetite for that aspect of the game as much as the technical excellence of a system.

Ulster need to look into hearts as well as minds to answer where a deficiency seems to exist because they have conceded far too many points.

Every team can be broken down but the manner in which the Irish province has conceded some of the tries in recent Pro14 matches has to be a concern. Discipline is an integral part of defending, both in not conceding penalties and trusting a system; good communication is key too.

Ireland captain Rory Best is absent with a foot infection and while he will obviously be missed Rob Herring is a very able deputy, who allowing for the fact that Iain Henderson is captain, will have a leadership role. And while on the subject of hooker, John Andrew has been impressive and is a young player with potential. It’ll be instructive to note how he copes.

Wiehahn Herbst returns after injury and his team-mates will require him to be at his best as Harlequins with their two Lions props in the front row are sure to try and discommode the visiting scrum. The absence of former Wallaby secondrow James Horwill and starting tighthead prop Will Collier is a setback for the home side.

Ireland international Kieran Treadwell returns to the club from which he joined Ulster. The visitors boast a very mobile backrow. Henderson is a wonderful athlete and rugby player, Sean Reidy’s quiet excellence has been recognised by Ireland in the past while former Blackrock schoolboy and underage international Nick Timoney is in the team on merit.

Collectively Ulster need more bristling aggression from the pack because ultimately unless they can establish some sort of platform, the quality of their backline will be about as useful as a ‘chocolate teapot’ as former Ireland coach Eddie O’Sullivan is wont to say.

Ulster’s back three of Charles Piutau, flanked by Craig Gilroy and Jacob Stockdale, are capable of cutting asunder any defence while Stuart McCloskey is a player who has been a consistent leader for his team this season. Tommy Bowe has switched between wing and outside centre; it requires a little adjustment, more so in defence.

Christian Lealiifano has proved a brilliant signing, albeit short-term one and he’ll be an important figure if Ulster are to prevail. It is in these matches that John Cooney must prove he has the capacity to play Test rugby.

Harlequins are coming off a superb win over Saracens in the English Premiership last weekend and know that anything other than a victory will render their interest academic in how the business end of the pool pans out.

This is eminently winnable for Ulster but to do so requires that attitude adjustment.