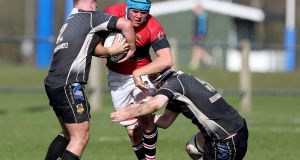 Teenage outhalf Alan Tynan was the toast of Young Munster after his last-ditch drop goal steered the Cookies past top-four rivals Clontarf.

Munsters came away from sunny Castle Avenue with a 13-11 win as they ended their two-match losing streak in Ulster Bank League Division 1A, climbing above ’Tarf into third place in the process. Wingers Craig O’Hanlon and Rob McGrath had a try apiece in the first half.

With just two rounds remaining, Lansdowne’s position at the top of the table is under real threat after they were held to a 15-15 draw by struggling Old Belvedere. Indeed, only five points cover the leading four clubs in the hunt for a home semi-final.

Bottom side Old Belvedere staged a stirring second-half comeback against the leaders, which included tries from Sean Coughlan and Daniel Riordan.

Lansdowne flanker Joe McSwiney was sent off in the 56th minute for a high tackle.

Garryowen, who are also battling relegation, leaked a late try to Max Abbott as Cork Constitution ran out 26-20 winners at Temple Hill. Tomas Quinlan kicked 16 points for the second-placed Leesiders.

Nothing could separate UCD and Terenure in a 3-3 draw at Belfield where Jake Swaine and Matthew Gilsenan swapped penalties, while St. Mary’s outscored Trinity by five tries to win 37-24 at College Park. Talented full-back Terry Kennedy blazed through early on for a stunning solo try.

Meanwhile, Kennedy’s Ireland Sevens colleague Jordan Conroy helped Buccaneers clinch the Division 1B title and promotion with a 30-23 victory at home to Naas. The speedster scored a hat-trick of tries, taking his tally for the season to an incredible 17.

Old Wesley joined second-placed UL Bohemians on 47 points after a thrilling 31-27 bonus point win over the Limerick side – centre David Poff grabbed his fifth try in four rounds via an intercept.

UCC made it five wins in six matches by beating Ballymena 26-24 at Eaton Park where centre Paul Kiernan touched down twice.

There is now just one point between Dolphin and Galwegians at the foot of the table following the Cork side’s 29-22 defeat of the Blues in Glenina. Captain Barry Keeshan starred with a 19-point haul, kicking five penalties and converting Gerry Ryan and Cian McGovern’s tries.