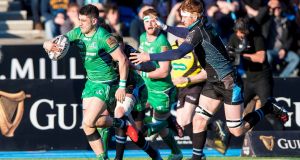 Saturday’s loss in Glasgow put paid to any hopes of Connacht closing the gap on the top five Guinness Pro 12 automatic qualifiers, and now Pat Lam’s men head to Zebre to play a catch-up match, while one seasonal ambition of a Champions Cup quarter-final is played out in Thomond Park without them.

But Lam says Connacht must continue to fight.

“All we have to do is keep playing and get all the points we can,” Lam says. “ There is still five rounds for us, four for everyone else, and we will see where we are on the last weekend.

“There is a big gap between ourselves and Cardiff and the rest, so no doubt the play-offs, and we always knew our main battle would be with Cardiff because of this thing where there has to be one from every country going through. It is an area that needs to change. I’ve said it before, the top seven should go through.

“Ultimately we have to admire the effort, but we blew a few scoring opportunities and gave away a few. It is just disappointing. We had a genuine chance. The score reflects the game, but to get nothing out of it is frustrating.”

For long periods Connacht looked like returning to last season’s championship form, but a lack of clinical finishing proved their downfall against a Glasgow side that reverted to their set piece strength in the second half to get their noses in front before some poor defence by Connacht produced a four-try bonus point.

Despite a one-sided opening half, Connacht found themselves ahead by just two points at half-time, 15-13, after opening with a well-finished try from Niyi Adeolokun created by Tiernan O’Halloran’s injection of pace.

Glasgow soaked up the pressure with aggressive defending and lived off Connacht mistakes, adding a Finn Russell penalty before hooker Cory Flynn charged over from Stuart Hogg’s chip and chase.

Connacht, however, were back on the front foot when Ronaldson added a penalty and a conversion to captain John Muldoon’s 30th minute try, but after Russell and Ronaldson exchanged penalties either side of the break, Glasgow took control.

The excellent Horne set up Russell for a converted try, before their international replacements turned the screw in the scrum for Ali Price to dart over. Ronaldson reduced the arrears to six after Glasgow’s Tim Swinson was red carded for a swinging arm, but it was not enough when Glasgow added a fourth try through Sean Lamont.