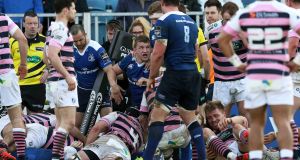 Even for a positive thinker like Leo Cullen, picking over the carcass of Leinster’s match against Cardiff at the weekend with next Saturday’s visit of Wasps in mind is no easy task.

An overzealous and easily spooked young side that issued invitations to score at the merest suggestion by Cardiff will have shaped Cullen’s thinking but may not have added a great deal to how he can go about winning the European quarter-final.

What will allow him sleep this week is the raft of international players coming back, and even without the injured No8 Jamie Heaslip and fullback Rob Kearney, Cullen understands two things.

The team that beat Cardiff by a point will not be the team to face Wasps; but, more pertinently and dangerously, Cardiff are not Wasps. The club that leads the Premiership table may be playing the best rugby in Europe right now.

Maybe, too, the remnants of last year’s pool stage beating by Wasps, 6-33 in the RDS and 51-10 in the Ricoh Arena, casts a shadow across Cullen’s certainty of a positive outcome. There are ghosts to be exorcised alright.

“There’s a level of relevance to it,” he says of Wasps last year. “They were pretty tough outings. You talk about that Wasps game. We’d maybe 70 per cent possession.

“Maybe that was the figure. But there’s no point in saying that after the game. We were well beaten on the scoreboard. We need to manage the game better and take some learnings from those games.”

With 45,000 tickets sold for the Dublin game and an eventful, shaky, callow 22-21 win over the Welsh side, there’s no reason for Leinster to flinch. Is there?

On the plus side, Garry Ringrose, Robbie Henshaw, Johnny Sexton, Tadhg Furlong, Jack McGrath, Devin Toner and Seán O’Brien will all come back after international duty, while Josh van der Flier and Isa Nacewa now have games in their legs after injury. All told, that makes Leinster half a national side better off. But in some ways it is like astronauts returning to earth from an eight-week stay in the zero gravity of the Six Nations space station.

Joe Carbery can slot in at fullback and it’s no slight on Heaslip’s ability to say the extravagant range of the Leinster backrow is one that just keeps giving.

“When we came off November it was pretty similar and we went into a Friday game against Northampton, so we’ve already dealt with it once this year,” says Cullen about the players having to readjust after living under Joe Schmidt’s laboratory conditions.

“I know the November window is not quite as long as the Six Nations, but it is something the players have dealt with already and we’d a few injuries at that stage.

“We managed to get through. But it’s a totally different challenge. A lot of the players played at the Aviva Stadium against England. They’ve a reasonably positive experience of that, positive memories.”

There was an experience deficit on show on Saturday with Leinster giving the unsettling impression at the end that the final whistle was like a call to man the lifeboats. But his faith in the players is strong.

Their obvious strength is that they have plenty of ability and it’s a point Cullen argues strongly. But during the European knockout phase that alone isn’t enough, an aspect of the game borne out by Saturday’s RDS performance: plenty of ability but lacking steady influences.

“The nature of the Leinster model is to invest a lot of time in younger guys and maybe this is their chance to step up,” says Cullen. It’s an honest point to make. But it still comes back to Cardiff being a different animal to Wasps.

“They have so much threat,” he says of the English side. “They have a lot of power in their forwards as well. You’ll see Nathan Hughes and James Haskell in the Six Nations. Launchbury as well, three big powerful men that come back into the team.

We just have to be smart about how we manage the game, certainly smarter than we were today

“They have gone well during the Six Nations spell as well. But the threat they have whether it’s [Danny] Cipriani or Jimmy Gopperth, who plays at 10 . . . two very dangerous guys.

“Some of the outside back threats they have as well, a lot of pace and power, and they can score points very, very quickly. We just have to be smart about how we manage the game, certainly smarter than we were today.”

It was a forward pass by fullback Matthew Morgan that handed Leinster their Pro12 win against Cardiff. At the fag end of the match the Welsh swept up field, again with the home team scrambling and fanning out going backwards.

Wales winger Alex Cuthbert on the right alone and spinning on his wheels was doing something resembling the Welsh folk dance, the Ty Coch Caerdydd, in an effort to draw attention. All it needed was one more long pass out.

Instead, the ball was bundled forward. Leinster escaped and probably deserved to. Wasps won’t be as generous and that, everybody understands.