Will Addison starts in midfield for Ulster’s duel with Dragons 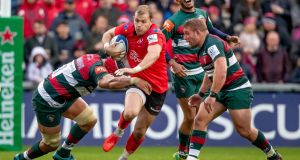 Will Addison will wear the number 13 jersey as Ulster take on the Dragson in Belfast. Photograph: Morgan Treacy/Inpho

New Ireland call-up Will Addison will start in midfield for Ulster in Friday night’s Pro14 clash against the Dragons in Belfast.

And there is a full Ulster debut for academy product and Ireland Sevens flyer Robert Baloucoune, who will start on one wing - with the returning Henry Speight on the other. Fullback Michael Lowry completes the back three.

Addison is joined in the centre by Stuart McCloskey with Dave Shanahan and Johnny McPhillips in the halfbacks.

Rory Best will start at hooker with Marty Moore and Eric O’Sullivan - another academy graduate - at prop.

Iain Henderson is joined by Kieran Treadwell at lock, with Sean Reidy, Jordi Murphy and Marcell Coetzee in the backrow.