Uncapped Ross Byrne, Will Addison and Sam Arnold called up for November 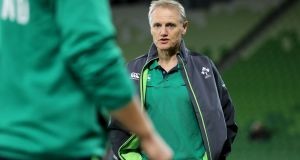 No less than last summer’s tour, the announcement of the 42-man squad for the forthcoming four-match November window felt like a significant landmark on the road to the 2019 World Cup in Japan.

With the 31-man squad for that tournament in mind, the door isn’t quite closed but henceforth it’s going to take some effort by those on the outside to force their way in.

Of the 32 players who were chosen for three-Test tour to Australia, only one player wasn’t named yesterday, namely the sidelined Conor Murray, and when fit he’s arguably the first name on the team sheet.

Of the 11 who were added to the squad yesterday by Joe Schmidt and the rest of the Irish coaching ticket, the captain Rory Best was a certainty, and opportunity now knocks for the other ten.

Viewed in this light, among the most notable inclusions in addition to the trio of uncapped players, Ross Byrne, Will Addison and Sammy Arnold, are the recalled duo of David Kilcoyne and Finlay Bealham, whose strong starts to the season see them join the five props who went on the Oz excursion.

Bealham won the last of his seven caps on the summer tour to Japan last year, but has added to his all-round game with some strong scrimmaging on the tight head side for Connacht this season. Quinn Roux, packing down behind him, has also been putting himself about and retains his place.

As with the five locks, the five back-rowers from last summer’s tour have all been retained, and as expected have been supplement by the fit-again and recalled trio of Sean O’Brien, Josh van der Flier and Rhys Ruddock.

As ever it is the most competitive, fluid and attritional area of the squad, and by including all eight capped back-rowers, thus delays some difficult decisions for the time being, and with good reason.

Like everyone else in this squad, they’ll feature in the November window, and like other front-liners, the game time of Peter O’Mahony and CJ Stander this season suggests they are amongst the front-liners being kept back from the Italian game in Chicago with the ensuing Guinness Series matches against Argentina and New Zealand in mind.

Conor O’Shea’s selection of a largely second string Italian team for that match, fully 10 days out, only hardens that likelihood.

In the absence of Murray, opportunity knocks for the recalled Luke McGrath as one of three scrumhalves, while after six starts on the spin at outhalf for Munster, Joey Carbery appears likely to be rested against Glasgow this weekend with a view to starting against Italy. In any case, he and Byrne look set to be on duty in Chicago, with Sexton amongst those remaining at home.

Midfield is interesting, with options more plentiful than could have seemed possible a few years ago. It was always expected that Addison would be named after training with the squad in the week of the Melbourne Test and again at the Carton House in August. He oozes confidence on the ball, as befits a player with his footwork, running and distribution skills.

More unexpected was the inclusion of Arnold and Stuart McCloskey. The hard-running, physical 26-year-old McCloskey impressed most observers when pitched into a Test debut against England in the Six Nations at Twickenham in February 2016 – a relatively long time ago – but has only played at Test level once since, against Fiji in November a year ago.

He perhaps offloads too much for Schmidt’s liking, but his hard carrying and willingness to free his hands in the tackle have been given free rein by Ulster this season, and in addition to high and effective tackle counts, McCloskey also demonstrated improved handling skills with a superb skip pass for Jacob Stockdale’s try against Leicester on the opening weekend of the Heineken Champions Cup.

The Munster winger Darren Sweetnam has also been rewarded for hitting the ground running to join the five outside backs who were on the Australian tour. In contrast to midfield, the cupboard here seems thinner than it was a few years ago.

Like the others who were either called up or recalled, this is an opportunity, but there won’t be many more of them, least of all when it comes to defending the Six Nations.

There are some notable omissions, aside from Murray. With Best back in the fold, and Niall Scannell and Rob Herring having impressed on tour, the latter two are retained along with the in-form Sean Cronin, and so James Tracy misses out again. Similarly, with seven props named, James Cronin and Stephen Archer look well down the pecking order,

It’s also going to be hard for Ultan Dillane who, like McCloskey caught the eye in Twickenham in 2016 but won the last of his 11 caps against Fiji a year ago, to force his way into the World Cup frame now.

Aside from Murray, you wouldn’t rule the sidelined Chris Farrell out of the equation and given his eye-catching trio of appearances last season, most notably against Wales. And, at a real push, you-know-who in Racing 92. But otherwise, yesterday seemed like something of a cut-off point.

Ross Byrne
Another off the remarkable St Michael’s conveyor belt and, though only 23, already has a good body of work behind him with Leinster. A good game manager with seemingly unflappable temperament. Unused in Australia yet impressed in training on tour, and had been entrusted with bench duties in the decider, so debut looks like coming in Chicago, with a start against the USA possible.

Will Addison
The 26-year-old product of the Sale academy spent ten years there and made over a century of appearances but is eligible through his Irish mother. Makes no secret of his ambitions to play for Ireland, has already been in two Irish training camps and already clear why Schmidt is a fan. Composed, elusive and clever.

Sammy Arnold
The 22-year-old has long since declared his allegiance to Ireland (his other was born in Wexford) and after a season in Ulster relocated to Munster in 2016. Hugely committed runner and ferocious tackler, Arnold’s inclusion was less anticipated than that of Addison but he is rewarded for some energetic and committed performances for Munster this season.