Consistency in interpretation and administration of the law the greatest challenge 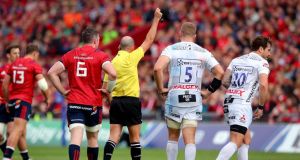 The circumstances pertaining to red cards in the second round of matches in this season’s Heineken Champions Cup superseded most other considerations with regard to the rugby last weekend.

They inspired heated debate not only with regard to the relevant dismissals, Gloucester outhalf Danny Cipriani and Castres Olympique number eight Maama Vaipulu, but also in relation to several players that escaped censure.

Leaving aside the partiality and subjectivity that coloured some of the conjecture on social media, there were genuine and reasonable misgivings about the consistency in interpretation and implementation of the laws.

There will always be a slight difference when it comes to individual refereeing styles but there’s less wriggle room when there is a lack of uniformity in the same match.

At the epicentre of the debate was an edict from World Rugby that “certain aspects of foul play law needed to be reinforced by match officials,” principally in the tackle and cleanout to ensure that there was no contact with an opponent over the line of the shoulders.

The clampdown is nothing new in that there has been an emphasis on certain aspects of the game in the recent past, like tip tackles and aerial clashes, and as a result they are less common. World Rugby introduced a “nipple line height” above which a tackle was punishable during last season’s U-20 Junior World Championship.

It’s reasonable to assume that the sport’s world governing body isn’t picking these areas of focus randomly, a supposition that’s borne out using the past five seasons of the Champions Cup and the first two rounds of the current tournament as a study.

There have been 381 yellow cards and 20 red cards in 355 matches – they are the official figures provided by EPC Rugby – during that period in the Champions Cup. That works out at 1.07 yellow cards per match but it is the red variety (one just under every 18 games) that offer a clue as to why there is an emphasis on the tackle height.

In the first season studied, 2013-2014, the then Ulster fullback and now defence coach Jared Payne was sent off in a quarter-final match in Belfast for a collision with Saracens fullback Alex Goode and the second related to Ospreys and Wales secondrow Ian Evans. He was adjudged to have stamped on Leinster’s Mike McCarthy thereby receiving his marching orders from referee Romain Poite.

Nine of the 20 red cards were for offences in which the perpetrator was deemed to have caught an opponent with a shoulder or arm to the head, neck or jaw. Most occurred in open play, a few related to a player making contact with the jaw/head area of an opponent at a ruck. So 45 per cent of the red cards were for a “high tackle” and all received a ban from one week to 12 in Evans’s case and points in between.

This figure (nine) does not include players who were cited post-match for high tackles or any yellow cards awarded for the same transgression. The next most common red card offence was stamping (three), aerial collisions (two), tip tackles (two) while contact to the eyes (one) and biting make up the other transgressions.

While there was one instance of a red card for a high tackle in the first three seasons when Bordeaux-Begles player Jean Baptiste Dubie was sent off for catching the then Ospreys outhalf Dan Biggar with a forearm to the jaw for which he received a one-week ban, there have been eight in the past two seasons and two rounds of the tournament.

If this trend – the high tackle is responsible for eight of the last 13 red cards (61 per cent) in the Champions Cup – is reflected across international and club competitions then it’s hardly a surprise that World Rugby are looking to address the issue through more a more rigorous application of the law.

While there is no doubt players may well be unfortunate in certain circumstances to get the line and that the competitive nature of matches will be compromised by dismissals (much to the chagrin of those emotionally involved, playing, coaching and supporting), the outcome has to be either tweaking tackle technique or else running the risk of being shorthanded in games.

A key factor will be the consistency in applying the law and, as last weekend demonstrated, that is perhaps the greatest challenge.