Leinster make it a blue Christmas for Saints 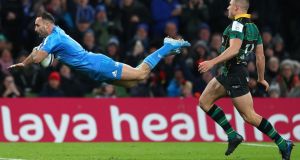 Dave Kearney of Leinser dives over to score a try that was subsequently disallowed. Photo: Michael Steele/Getty Images

A facile triumph, the foundations of which were laid with a brisk opening salvo and then followed by intermittent excellence that saw Leinster complete a fourth successive victory in this season’s Heineken Champions Cup and in booking a place in the quarter-finals as pool winners with two rounds of matches still to play in January.

The home side accumulated seven tries, several borne of training ground precision and artistic endeavour, others more prosaic as they ruthlessly dismantled a Northampton Saints that had made eight changes from the team that were thumped by Leinster in Franklin’s Gardens last weekend.

The Saints elected to rest a number of players, perhaps with one eye on an English Premiership game away to Sale Sharks next Saturday. If they travelled in hope they were quickly disabused of any notions of an upset.

Leinster set about them with relish and the victory was underpinned by several standout performances not least man-of-the-match, Jordan Lamour (112 metres, 12 defenders’ beaten), Garry Ringrose, who crossed for a hat-trick of tries and Ross Byrne, who provided intelligent direction and game management. Up front Tadhg Furlong was back to his bullocking best, Rhys Ruddock carried hard and Caelan Doris had his best game for the province; the pack were excellent to a man, ably led by Scott Fardy.

There were blemishes; some of Leinster’s defending was brittle and passive; Northampton didn’t have to work particularly as a rule hard for their tries. The home side also coughed up some gilt edged try scoring chances, a little imprecise and impatient at times while the penalty count (11) won’t please Leo Cullen. These are relatively minor cavils when weighed against the overall performance and particularly the outcome.

There was a vibrancy to Leinster’s patterns in the first half, varied and fluent for the most part, changing the point of attack, sucking in the Northampton cover by pummelling the visitors around the fringes before getting round the edges in the outside channels.

The Saints struggled to cope with the high octane tempo, scrambling furiously to plug holes. It could have been even worse than the 31-points they conceded in that period because Leinster left a couple more tries behind them in the opening 40-minutes. The home side also conceded a couple of soft tries that will rankle slightly.

The irony was that Leinster’s first try had nothing to do with creativity. The home side had turned over possession in the Saints’ 22 but Ringrose speed off the mark and surprised Northampton centre Andy Symons whose kicked he charged down, re-gathered and dotted down.

Leinster’s second try on six minutes was beautifully crafted. From Scott Fardy’s lineout take, Leinster shaped to maul, but instead moved the ball. Byrne’s inside pass to James Lowe was nicely timed, as was and the winger’s one-handed offload to the supporting Ringrose who skated over. Byrne tagged on the conversion.

The outhalf kicked a penalty and even though Dan Biggar responded by converting his own try, the visitors couldn’t check Leinster’s momentum. Northampton were briefly reduced to 13-players when fullback Ahsee Tuala received a yellow card for a tug on the shirt of Lowe and then Saints captain Tom Wood followed him to the sin bin as the beleaguered visitors continued to transgress close to their line after referee Dan Jones had previously issued a warning.

Furlong trundled over for the home side’s third try, Byrne again converting, and a fourth materialised when Ruddock ripped away possession in midfield; the elegant Ringrose occupied several defenders with a mazy run, dummied a switch with Josh van der Flier and Dave Kearney stepped out of a tackle to cross close to the corner.

Robbie Henshaw saved a certain try with a brilliant chase back on Lewis Ludlum but the Saints did have the final say of the half when Ollie Sleightholme scooted over in the corner, Biggar adding the conversion.

Like the barrels on a slot machine the scoreboard kept spinning in Leinster’s favour, Lowe racing onto a delightful grubber kick from Ross Byrne to touch down two minutes after the re-start - the move originated with a superb break from Jordan Larmour inside his 22. Byrne picked up a knock and then departed to a warm ovation, deserved recognition for an excellent performance.

Ringrose grabbed his hat-trick try, snaffling a loose ball close to the Saints line and it looked like Dave Kearney would race 80-metres for his second of the match shortly afterwards but the television match official Sean Bricknell adjudged that Leinster had been offside when defending 10-metres from their line.

Tuala found no one at home as he scooped up a ball at a ruck and enjoyed an unchallenged trot from to touch down under the posts, Biggar again converting to make it 43-21. Doris was similarly untroubled when crossing for a try on 66 minutes, a reward for a fine display, Ciaran Frawley posting the conversion having come on for Byrne.

Larmour’s twinkling feet saw him beat five would-be tacklers soon after - much to the home supporters’ delight, their cups already running over with festive cheer as the game petered towards a conclusion that had been effectivley decided over an hour previously.