Stephen Larkham ‘has no plans’ to leave Munster for Australia job 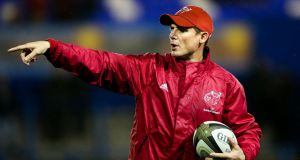 Munster senior coach Stephen Larkham: ‘I’m not thinking about the future after Munster at this stage.’ Photograph: Rogan Thompson/Inpho

Munster backs’ coach Stephen Larkham says he has no intention of walking out on his new employers to be the new Australia head coach, but he does wish to get the job at some stage in his career.

Larkham (45) joined Munster this summer as part of Johann van Graan’s revamped coaching ticket, but the departure of Michael Cheika after the World Cup in Japan has freed up the top rugby job in his native Australia.

Larkham was let go from the Australian coaching ticket earlier this year by Cheika, and with England coach Eddie Jones and Glasgow Warriors coach Dave Rennie linked with the position, Larkham has ruled himself out of the running.

“At some stage I would say yeah [I’d like to coach Australia], at some stage,” said Larkham.

“Like I said before I’m really enjoying the environment here and the challenge here and I have no plans to leave at this stage and I’m not thinking about the future after Munster at this stage.

“Exciting times [for Australian rugby], it’s a changing of the guard with a new coach coming in. And I think that’s always exciting. There will be a flow and effect on the Super Rugby teams and the club rugby over there.

“We didn’t finish the World Cup the way we wanted to finish it, in fact the lead up to the World Cup wasn’t nearly as successful as it should have been. But it’s a new step it’s exciting because something new is about to happen.”

Larkham is preparing for his first Irish inter-provincial game this weekend with Munster facing Ulster at Thomond Park in the Pro14 on Saturday. The following week they will switch focus to the Heineken Champions Cup.

The severity of the sanctions imposed on Munster’s Pool 4 rivals Saracens yesterday stunned the rugby world, with a £5.3 million fine and 35-point Premiership deduction dished out for salary cap breaches. Saracens have said they will appeal the ruling. Larkham said that sort of financial cheating “would not sit well” with him.

“We can’t control that. They are obviously dealing with the repercussions of that at the moment. For us it’s not going to change anything in the European games that we’re going to play them in. They haven’t lost any points out of Europe, have they?

“If they’re allowed to play their players throughout the European Cup then that’s our challenge. It wouldn’t sit right with me if that was my team, but it is being dealt with and I think it’s being dealt with fairly.”

With more than 100 Australia caps to his name, and having spent four years as the national team’s backs’ coach, Larkham is well placed to assess the strengths of the game north and south of the equator.

After three months in Limerick, he already thinks the skill levels and ability to learn are higher among Munster players than his former team-mates and players.

“You’d be pleasantly surprised. At the Brumbies you have the international players for the full season but here we’ve finally got our full squad back together this week for the first time. But I have been really impressed with the players in the first five rounds of the Pro14.

“Honestly, I was very impressed with the skill level of these players. I’m not saying Irish players, I’m saying Munster players. And their ability to learn things is definitely better than some Australian players.”

Munster coach Johann van Graan confirmed that the province are in “advanced discussions” with South African World Cup winners Damian de Allende and RG Snyman but that neither signing has been confirmed.

Centre De Allende and secondrow Snyman, who are both saw action in Saturday’s final victory over England, are expected to join Munster from next season.

Speaking at a press conference on Tuesday, van Graan said: “We are in advanced discussions with both players, but there are no contracts signed at this stage.

“We are confident there will be a commitment in the future, subject to conditions, but at this stage no contracts have been signed and we have nothing official to confirm.”