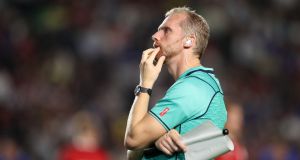 Assistant referee Wayne Barnes waits for the TMO during the game between Italy and Canada in Fukuoka. Barnes seems to be having second thoughts about retiring. Photograph: Shaun Botterill/Getty Images

The sun has set on the Rugby World Cup, so it is a fitting moment to say a heartfelt “arigato” to Japan.

Returned home, wearied, and perhaps a little saki-ed, everyone will have a smile on their face, and rich memories which will be recounted for years to come.

The Japanese culture of unfailing politeness and respect offers a rich lesson. We can all learn something – a pity if not.

It’s now important to consider what’s to come and to look towards the Heineken Cup, and to the Pro14 which is already well under way.

Just like the players, the first thing to do is to decide what sort of break referees need before returning to the fray. If it is handled well, then they should not be seen again for about six weeks. In the past referees were very anxious to keep going, and, when that was conceded, it never worked out.

Failing to fully recharge all batteries will risk negative performances down the road.

Some of the refs are on the verge of retirement: Wayne Barnes announced that he’d be finishing after the tournament, but seems to be having second thoughts.

Jérome Garcès has already gone to take over management of the elite referees in France. Nigel Owens’s enthusiasm and ability remains undimmed, so I think he’ll be keen to stay put, and maybe finish at the end of the season.

Potential retirements will put pressure on European Referee Manager, Joel Jutge, and I’d imagine he’d be more than happy if Barnes and Owens are available this season.

There are Heineken Champions Cup matches which are far tougher than some Six Nations matches. Quite a few of the next referee generation are not yet at that level.

The appointments, for the first two rounds confirm opportunities for that new generation. It’s important they step up.

A serious problem here is that the Pro14 is hell bent on neutrality, and that means that quite a few referees have not been in action with the frequency of pressure needed to get used to the bigger stage.

A policy of neutrality is, of course, possible, but it compromises quality. And it works against the interests of the countries that have four teams in the competition, Wales and Ireland. Matches between clubs from these two unions provide the stiffest challenges for referees.

Conversely, it works for the interests of Scotland, Italy and South Africa, whose referees in the competition have, regretfully, been below par too often.

It can also be argued that, say, a Munster referee who controls Cardiff against Ulster is in fact neutral. It’s a club competition, and the affiliation to Munster of these refs very definite. Same with the other provinces.

It’s a choice really – be criticised for poor performances when neutral refs are not up to the mark. Or be criticised for the perception that referee errors are caused by partiality – basically, an accusation of bias. Should that really determine the approach?

Take Super Rugby in the southern hemisphere – they don’t care about this perception, they appoint on merit.

Here’s what coaches and teams want – “the best referees for the best matches.”

The appointments are made solely by the Pro14 referee manager, it seems no selectors are involved.

Welsh and Irish referees should be shouting from the rooftops for equal opportunity of both quantity and quality of matches. If they’re proven not good enough, then fine, exclude them. And the same for everybody, please.

Who would take up refereeing if there’s such a closed door, particularly since it’s the one to the Champions Cup and beyond?

The Pro14 argues the quality of their appointments. The performances speak otherwise; and it’s an inarguable indictment that onlyOwens from the Pro14 refereed at the World Cup. No one else.

Some attention wouldn’t go amiss to the saying that a “good referee can’t make a game of rugby, but a bad referee can certainly ruin one”. As we have seen.

In the Pro14 the TMO has only two screens – one is the TV coverage, and one runs about seven seconds later

One hopes not, but the difficulties which we have seen with the high tackle sanction framework may well be replicated in the Pro14 and Europe. Don’t forget that the referees and TMOs will be at a level or more down from those at the World Cup. And they didn’t find it easy.

Here’s a related issue – the very sophisticated multi-screen Hawk-Eye system is not available to the TMO in the Pro14, or Champions Cup. In the Pro14 the TMO has only two screens – one is the TV coverage, and one runs about seven seconds (yes, seconds) later.

The problem is this – the TMO notices “something”, but play remains hectic. Does he take his eyes off the real-time coverage to look at the delayed screen or not? Damned if he does, damned if he doesn’t, high risk either way. It is not as easy as it looks.

In the Pro14 there are about seven/eight cameras. About 20 for the Six Nations, and there were 34 for the World Cup semis and finals. So, don’t expect the same number of viewing angles when the TMO is involved “at local level”.

It’s all not going to help in achieving clarity and consistency.

Finally, the amateur game, where more than 90 pre cent of rugby is played, must not be forgotten. Here the referees should not be asked to apply any aspect of the framework.

To do so would very likely create a minefield of delay, confusion, inconsistency and dispute. Let them continue as they are.