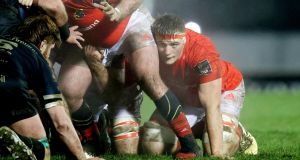 Munster’s Gavin Coombes in action against Connacht during the Guinness Pro 14 game at the Sportsground. Photograph: Bryan Keane/Inpho

Ireland head coach Andy Farrell will reveal how talent, previous service, experience and current form are weighted in his calculations when announcing the composition of his squad for the upcoming Six Nations Championship. Those characteristics are unlikely to be of uniform importance.

If current form was an overriding marker then Leinster’s Rhys Ruddock and one of Skibbereen’s finest rugby sons, Munster’s Gavin Coombes would be shoo-ins based on performances for their respective provinces this season. In a quirk of fate they also share several similarities statistically in examining the season to date, possessing overlapping qualities.

The 30-year-old Ruddock has 26 Ireland caps and ticks all four boxes when it comes to the aforementioned criteria. He has been outstanding for Leinster this season, as an interim captain and player, during the province’s matches in the Pro14 and Champions Cup, winning a mantelpiece full of man of the match accolades.

Ruddock has played 10 of Leinster’s 11 matches this season, six at number eight, three at blindside flanker and one as a replacement. Leinster forwards coach Robin McBryde spoke earlier in the week about the player’s qualities, highlighting collision dominance, how effective Ruddock is on both sides of the ball and the leadership that he has brought.

Jack Conan’s absence through injury until recently and Caelan Doris’s commitments with Ireland meant that Ruddock was handed the number eight jersey rather than his more traditional role of blindside flanker. There was no diminution in his influence and he coped with the change of circumstances impressively to a point where he started at number eight in the Champions Cup game against the Northampton Saints.

One of his strongest attributes is his power in contact, his ability to guarantee positive gainlines often in heavy traffic and the capacity to aggressively and effectively shut down opposition ball carriers. Leinster lost the only match in which he didn’t take part, the 35-24 defeat to Connacht at the RDS.

Leo Cullen spoke in the aftermath of how his side hadn’t matched Connacht’s energy, physical intent and intensity, qualities that Ruddock guarantees and demands of, or procures from, his team-mates when he is on the pitch.

Coombes shares many of Ruddock’s attributes based on that power game, a corrosive ball carrier who is very difficult to stop from close range as several teams have found out first hand this season. What the 23-year-old west Cork man also possesses is excellent passing and handling skills.

At six foot, six inches he’s a lineout option – he can play in the secondrow too – and his physicality in the tackle and at the breakdown (seven turnovers) is a sizeable asset.

Coombes, like Ruddock, has played 10 of his team’s 11 matches this season, the first couple as a replacement and then eight starts, five at number eight when Munster’s international contingent were largely not around and the last three games at blindside flanker.

During that run he’s scored seven tries, principally in eight matches – his first two games of the season off the bench were for 17 and 19 minutes – including a hat-trick against the Ospreys and his most recent against Harlequins in the Champions Cup. His performances have also been recognised with multiple man-of-the-match awards.

In a curious coincidence that ties that two players together, the only match in which Coombes was not part of Munster’s matchday 23, Johann van Graan’s side were beaten in Belfast. Ruddock and Coombes have played 10 of 11 matches this season for the respective provinces and in the game they missed, their teams lost.

Coombes represented Ireland at underage level and there’s no doubting his aptitude to progress if he maintains his current rate of improvement and develops one or two aspects of his game.

This season a work-on is to keep pushing fitness levels that allow him to maintain a consistent impact in the high-calibre games. He doesn’t have to look very far for inspiration. CJ Stander’s mental and physical toughness, his unrelenting work-rate is something to which Coombes could aspire.

Farrell may wish to invest time in Coombes, acclimatise him in the national squad first in a training capacity. To that end the young Munster flanker will need to impress again on Saturday.

He’s not guaranteed selection, nor is Ruddock, which seems ludicrous considering how good they’ve been but both should start, possibly in the number six jersey.

Assuming it’s not a draw and they play, either Coombes or Ruddock is set to lose their status as talismans, having been on the winning side in all 10 matches in which they have participated. The consolation for the player who ends up disappointed on Saturday may be a place in Farrell’s Ireland squad alongside the player extending that winning sequence.