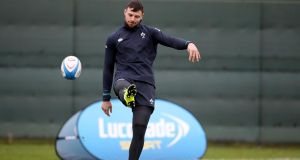 Robbie Henshaw has not played since picking up an injury in Ireland’s opening Six Nations match against England and is a doubt for Leinster’s Champions Cup quarter-final against Ulster. Photograph: Dan Sheridan/Inpho

Flanker Dan Leavy has returned to full training with Leinster along with Joe Tomane and scrumhalves Luke McGrath and Nick McCarthy while Robbie Henshaw is not available for selection for this week’s Guinness Pro 14 match against Edinburgh on Friday night.

Henshaw, who is recovering from a dead leg, is now running out of time to be fit for Leinster’s Heineken Champions Cup quarter-final match against Ulster at the Aviva Stadium on Saturday week.

His lingering injury continues to be a source of frustration for both the player and Leinster. The centre and fullback has not played since Ireland’s opening defeat to England in the Six Nations Championship.

“Very frustrating for Robbie, I feel sorry for him,” said Leinster senior coach Stuart Lancaster. “He’s had two different injuries that have had different lengths out and he’s so frustrated himself. We’ll see, he’s not on field with us yet so obviously the clock is ticking towards Ulster.

“We’ll have a better idea come Monday, Tuesday next week. But again you get to the point in a week where you can’t wait. He’s making progress, he’s not far off, but as to if he’ll make Ulster we’ll see.

Lock Devin Toner, who is recovering from an ankle injury, is another frontline player struggling to make it in time for the Ulster match, while flanker Josh van der Flier will see a specialist this week about his groin injury.

“Unlikely but his timeline for return to play has actually come forward a bit,” said Lancaster of Toner. “He’s made great progress which is positive for us.”

“He’s [Josh van der Flier] gone for a scan today and seeing the specialist tomorrow so we’ll find out a bit more,” added Lancaster. “I don’t think he’ll be available for the next week or two, but as to how many weeks it’ll depend on tomorrow.”

Leavy is hoping to get game time against Edinburgh at Murrayfield for the first time this year as he recovers from a calf injury. McGrath is also “pretty likely” to take part in the game.

Lancaster added that Leinster will probably not line out the Irish players who return to the squad following Ireland’s Six Nations defeat to Wales last Saturday in Cardiff.

“I don’t think there are any injury concerns, but as to whether we involve them is unlikely. They won’t be back until Wednesday, so unlikely,” said the Leinster coach.

Leinster have already qualified for a home semi-final in the Pro 14 with four rounds of regular season games to go.