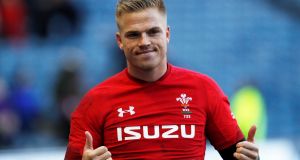 Gareth Anscombe: “Wales has a number of good players. We back our 30-man squad and feel we can take on anyone in the world.” Photograph: Russell Cheyne/Reuters

Wales may be armed with a record 13-match winning run when they face Ireland at the Principality Stadium on Saturday but Gareth Anscombe believes they must produce their best performance of the season if they are to mark Warren Gatland’s final competitive match at home with the Grand Slam.

Wales, who expect their fullback Liam Williams to recover from a shoulder injury, have not lost since the third round of last year’s Six Nations in Dublin, and the last time they were beaten in Cardiff was in November 2017 against the All Blacks.

Anscombe has taken over from Dan Biggar at outhalf and is determined to enjoy the biggest week of his career.

“We set ourselves the goal of the Grand Slam at the start of the campaign after a successful autumn,” he said.

“We knew we were capable of getting to this point and we are desperate to finish it off seeing how much it means to people here. We will soak up the atmosphere but it is important we do not get caught up in the occasion or the emotional side of things. We have to remember we are there to do a job and be clinical. It is trying to get that balance right, enjoying the start of the week and tuning in come Friday.”

While Ireland are underpinned by four provinces who will all be involved in the quarter-finals of the European Champions Cup and Challenge Cup at the end of the month, Wales’s four regions will have a watching brief.

The success of their rivals has been driven from the bottom upwards but Gatland has had to do it from the top down.

“When it comes to the club game, money comes into play,” said Anscombe. “The regions struggle when they do not have their best players; the second tier battles a bit.

“Wales has a number of good players. We back our 30-man squad and feel we can take on anyone in the world. Warren has the ability to get the best out of everyone and he has got to go down as Wales’s best coach: just look at what he has accomplished, going for his third Grand Slam. He leaves no doubt in your mind that the team will get the job done.

“Sometimes it would be nice if he kept it in-house rather than tell the media but he is exceptional in giving players the belief that they will win.”