Proposed merger between Ospreys and Scarlets is off 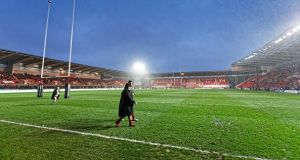 Scarlets have detailed the timeline which led to the latest announcement on the proposed merger being off. Photograph: Athena Pictures/Getty Images

The Scarlets and the Ospreys have both opened talks with their players who are out of contract at the end of the season after the proposed merger between the Welsh districts collapsed in acrimony this week, telling them it will be business as usual next season.

They include the Wales captain – Alun Wyn Jones is due to hold a media conference at Murrayfield on Friday afternoon. The Ospreys hope the secondrow, who has been with the region throughout his career, will extend his contract, encouraging the others, who include the Wales prop Nicky Smith, to sign.

Both regions addressed their players on Tuesday night, hours after a meeting of the professional rugby board – a body made up of representatives from the Welsh Rugby Union and the four regions – met to discuss the merger. They were unable to do so because the chairman of the Ospreys, Mike James, announced his resignation and walked out, meaning a vote could not be taken.

The merger emerged after the WRU asked the four – as part of its planned revamp of the game, Project Reset – to come up with a way of reducing their number by one so a new region could be created in north Wales: the union is canvassing the Welsh government for significant financial support. It wants to recalibrate regional rugby to counter disappointing attendances, failure in Europe and constant financial struggles.

The idea was to create two regions that would have a bigger playing budget than the other two to better compete in Europe and the Pro14, but the Ospreys were the only ones willing to move and once they realised they would effectively be consumed by the Scarlets, they cried foul.

The two regions both released statements on Wednesday that confirmed they would remain separate entities. The WRU remained silent, but at a meeting with regional supporters on Monday night its chief executive, Martyn Phillips, said that if the merger did not happen the governing body was legally bound to support the four regions equitably until 2022.

The Scarlets said the plan was driven by the regions and that the Ospreys had approached them in December to explore the option as “their tenancy at the Liberty Stadium was proving challenging”. Talks broke down in February when the Ospreys had fruitless discussions with Cardiff Blues before last week approaching the Scarlets again.

“Heads of terms were agreed and signed by the Ospreys and Scarlets on 1 March,” the statement continued. “This was to be proposed at a meeting of the PRB on Tuesday, but we were told after the start of it that the Ospreys had changed their mind. The merger is off the table.”

The Ospreys signed the heads of terms as a means of continuing the process, not committing themselves, and pulled out when they realised that what they hoped would be a merger that resembled their own creation in 2003 out of Neath and Swansea was a takeover that would remove all traces of their existence.

“It is now time for grown-ups to get back in the room,” said Robert Davies, James’s successor as Ospreys chairman. “There are stark realities: the concept of an Ospreys-Scarlets merger is dead and the clock is ticking. Wales was promised a comprehensive review with nothing off the table, but nothing has yet been put on it and the PRB cynically left it to the regions to have a shootout for survival with the clear direction that a region in the west should go to make room for one in the north.

“It is hard to look at this and not conclude that a stitch-up of convenience has just unravelled. There is not a Plan B because there was never a Plan A. Wishful thinking is not an acceptable replacement for responsible decision-making. We need a methodical process to emerge that is transparent.” – Guardian