Patient Ultan Dillane aiming to make the most of any chance

In a World Cup year full of possibilities, Connacht lock is keeping his focus on Cardiff 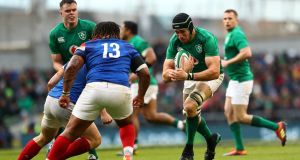 As Ultan Dillane tells it, his rugby career possibly ended twice before now. Yet here he is in Irish camp four days before Ireland meet Wales.

A promising player in the Munster Under-19s Dillane was dropped to the ‘B’ team. In his head that was that. It wasn’t. Crushed again when a full academy contract at Munster did not materialise, intervention came from his Irish U19s coach Nigel Carolan, then head of the Connacht academy, and Dillane was driving north to Galway.

Then about a month after his 21st birthday Connacht coach Pat Lam crooked his finger at him. Since then the Paris-born secondrow from Tralee has rarely looked back.

But just over a year ago Dillane’s mother Ellen, a nurse in Bon Secours hospital Tralee, tragically passed away. A constant in his rugby world, she was the life force behind almost everything he did including the innocent €5 bribes to keep the energy of a teenager channelled towards rugby and sport.

“I think my head was elsewhere in terms of what to focus on. As it happened, I just couldn’t play,” he says. “I’ve never looked back on last season and thought, ‘I should have done this and that’. I just felt it was a bit awkward.

“But I’m happy to be at this stage of the season, to feel fit and strong, and hopefully take it into returning to my province. I’m definitely in a better position than I was last season.”

His breakthrough with Ireland arrived in 2016, when he played eight times, three of those in the Six Nations, two in the summer against South Africa and three more in November.

In 2017, he added two more caps against Italy and Scotland in the Six Nations and played a full game against Fiji in November. But 2018 came and went. It was an arid year and Joe Schmidt didn’t once look to the Connacht lock.

This year has been like a second breakthrough year. Dillane came off the bench against Scotland for 12 minutes. He built on that against Italy starting the match for a 73 minute run and bagged 22 minutes as a replacement in Ireland’s win over France last week.

But if he has learned anything, getting and holding an Irish shirt isn’t easy. James Ryan, Iain Henderson, Tadhg Beirne, Devin Toner are his peers.

“He’s brilliant, yeah,” Dillane says of Ryan, man of the match against France. “He just has a feel for the game and he’s so young as well. He’s got the perfect height for it, the perfect attributes. He’s an incredible athlete, most of you would have seen him when he captained the 20s and he had some pretty impressive performances then.

“That was enough of a sign for us to go, ‘he’ll definitely be here soon’. There’s no surprise with him that he’s been playing outstanding in this tournament and I’m sure he’ll do so again this weekend.”

After the cameo against France there were mixed views. The bench as a whole almost increased the 26-0 scoreline. But the balance sheet said two tries against Ireland in the closing stages.

Still, his participation has been rewarding with Cardiff expected to be another new experience for the 25-year-old. The World Cup in Japan and a possible autumn of history are out there available to him. But that’s much too far ahead.

“Yeah, I mean to be honest I think I was quite fortunate, as it happened some players got injured and that gave me a bit more of a chance,” he says with Henderson, Beirne and Toner in mind.

“It’s kind of how rugby works. “I wouldn’t project myself that far at all. I’m just hoping about this week. That’d be great. After that I am thinking the World Cup won’t happen if I get injured and miss the rest of the season. And then the World Cup is not there.”

Then again that calamity might not happen. In Cheltenham week just holding position in the final run can sometimes be everything.

1 Gerry Thornley: Wild reactions to this Ireland team as fickle as the wind
2 Five Golf Classics for you to tee up at in 2020
3 Crunch time for Connacht as they chase Pro14 dream to South Africa
4 Munster were fever-tested when they arrived in Italy
5 IRFU not consulted prior to Minister Harris’ recommendation to cancel Ireland v Italy
Real news has value SUBSCRIBE