Six Nations talking points: Carnage will continue all the way to Cardiff

Momentum has a lifespan . . . captain, my captains . . . Ireland get their carry on 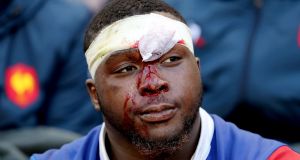 The carnage continued over the weekend and we are now almost becoming immune to it.

Already suffering something of an injury crisis, including the influential attacking duo of Stuart Hogg and Huw Jones, Scotland were further disrupted against Wales on Saturday when winger Tommy Seymour (rib) and fullback Blair Kinghorn (ankle) were forced off by the 31st minute. And when Darcy Graham went off in the 65th minute they had to play the last 15 minutes with a scrumhalf, Ali Price, on the wing.

You fear for them in Twickenham, where Seymour, Kinghorn and Hogg have already been ruled out of Saturday’s match against England.

You feared for Italy from the moment Eddie Jones unveiled his gargantuan side. Sure enough they lost three centres, Michele Campagnaro, Tommaso Castello and Luca Morisi, and finished with a prop in the backrow.

At the Aviva, France lost three forwards – Wenceslas Lauret, Dema Bamba and Jefferson Poirot – in a seven-minute period by the 17th minute, albeit Bamba returned soon after with his head heavily bandaged.

Josh van der Flier and Liam Williams were among other enforced and notable departures as well and one imagines there could be more where that came from next Saturday, not least in what looks sure to be a bruiser in Cardiff. Gerry Thornley

Let’s all quit this talk of World Cup momentum

The media is guilty of occasional crimes against common sense, largely inadvertent (mea culpa), but one that’s being pedalled among the rugby fraternity is the importance of Ireland taking ‘momentum’ from the Six Nations Championship into the Rugby World Cup in Japan.

It’s a noble sentiment but becomes less convincing when examining it for substance. Ireland play their concluding match in the Six Nations on March 16th. The last potential competitive match for an Irish player this season is with a province in the Guinness Pro 14 final at Celtic Park on May 25th.

So on a practical level taking whatever momentum can be gleaned with its intangible virtues from the game against Wales in mid March to the opening fixture of the World Cup in late September six months later is a bit like buying the snake oil from the medicine man. It might work but then again. John O’Sullivan

Best men required to take over from Rory

We caught a glimpse of the future against France. Post-World Cup Andy Farrell inherits a group stacked full of young leaders in key positions, namely James Ryan and Garry Ringrose, but dig a little deeper and Farrell has two key tasks before the 2020 Six Nations: replacing Rory Best as captain and replacing Rory Best at hooker.

The former decision looks far easier than the latter as Joe Schmidt consistently refuses to settle on a number two at number two. Best rides into the sunset as the most successful leader Irish rugby has ever known. Ryan or Ringrose, or both, as a dual leadership can fill that gap.

These words are written on the premise that Johnny Sexton and Peter O’Mahony will be recovering (sipping cocktails on an Irish owned Caribbean island) having guided Ireland to World Cup glory. It’s a fickle, fickle world but the team are back on track. Gavin Cummiskey

One of the most noticeable things during Ireland’s slow start to the Six Nations – particularly in the defeat to England – was their inability to gain serious momentum with the ball in hand. With the attack often too narrow it was left to the big ball carriers to make the hard yards, which they struggled to do.

However, this all changed against France, when Ireland’s power game was back to its best. The returning CJ Stander made a huge difference with 18 carries, as did man of the match James Ryan, who made 17.

They were ably assisted by Tadhg Furlong, Cian Healy and Iain Henderson, with the Irish pack consistently bullying the French on both sides of the gainline. The partnership between Ryan and Henderson in the secondrow is a fearsome one, offering raw power blended with dynamism, while Jack Conan added even more ballast when he replaced the injured Josh van der Flier.

The Welsh defence was magnificent against Scotland and with the likes of Ross Moriarty, Josh Navidi and Alun Wyn Jones they are hardly a collection of shrinking violets. A brutally physical contest awaits in Cardiff next weekend, but after Sunday’s showing Ireland will feel they are now fully locked and loaded and ready to meet Wales head on. Patrick Madden