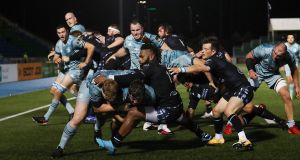 Leinster won their 23rd consecutive match in the Guinness Pro14 with an impressive victory at a rain-swept Scotstoun on Monday night. The visitors scored four tries to also earn a bonus point in a high quality, entertaining tussle. It was Glasgow’s first defeat at Scotstoun in a league game since December 2019.

The only downside was an injury to Rhys Ruddock, who was once again outstanding in his contribution.

Dan Leavy returned after 18 months on the sidelines against Zebre and earned more match minutes as he took another step towards regaining his former pre-eminence when replacing the Leinster captain. David Hawkshaw, the 2019 Ireland under-20 Grand Slam captain made his debut as a replacement.

It was a top-class performance from a young team and especially the Leinster eight to a man, with James Tracy, Josh Murphy, Scott Penny and Ruddock particularly eye-catching; the halfbacks Luke McGrath and Harry Byrne ran the game superbly and Tommy O’Brien and Cian Kelleher excelled behind the scrum. Leinster dominated the set piece of scrum and lineout too.

The visitors had to endure early pressure but Penny and Tracy won crucial penalty turnovers before settled into a playing rhythm and grabbed the first try of the night. Byrne attacked the line following some muscular carrying from the pack on the fringes, got his hands free and offloaded to the supporting Jimmy O’Brien who scampered over under the posts. The outhalf added the conversion.

Glasgow responded quickly with a try from scrumhalf George Horne, the legacy of a series of quick rucks with Rob Harley and Ryan Wilson getting over the gainline in the Leinster 22, and the visitors running out of numbers on the edge of the final ruck.

Leinster won a scrum penalty on 21 minutes which Byrne landed and then following two superb breaks from Tommy O’Brien, they earned another one in the Glasgow 22. This time Byrne kicked to the corner but the excellent Murphy was held up over the line.

It proved a temporary respite. Glasgow conceded another penalty and McGrath took a quick tap from five metres to wriggle past and under a couple of tackles. Byrne again added the extra points to push Leinster out to a 17-7 lead after 27 minutes.

Despite the heavy rain, Leinster continued to play some excellent rugby, led by the outstanding Ruddock, with the halfbacks McGrath and Byrne consistently threatening the gainline, making breaks or putting team-mates into space. They benefited from the excellent work of the pack that provided quick, front-foot ball and were dominant in the scrum.

Glasgow conceded another penalty inside their 22, Byrne tapped it into the corner and Penny benefited from a clever lineout variation to crash over.

The outhalf missed the conversion, unlucky 13, his first failure after 12 successful kicks in a shade under 120 minutes of rugby. It was a compelling opening 40 minutes from Leo Cullen’s charges, the challenge to maintain that momentum in the second half but it was Glasgow that were more aggressive and effective on the resumption.

They were rewarded with a try from prop D’Arcy Rae, the visitors initially conceding a penalty that allowed Glasgow access to their 22 and then fell off a couple of tackles as the home side beat a relentless path to the line. Peter Horne added the conversion, the game once again a contest at 22-14 after 42 minutes.

Leinster got the bonus-point try on 53 minutes, Michael Bent with his second in as many weeks after a fine break for Rory O’Loughlin. Glasgow fullback Huw Jones received a yellow card in the previous play. The home side survived without conceding any points and indeed dominated proceedings for 15 minutes or so but losing a couple of lineouts in the Leinster 22 cost them opportunities.

Tom Gordon crossed for a try with eight minutes remaining with Byrne ensuring that there were no nasty surprises by tapping over a penalty on 76 mins.