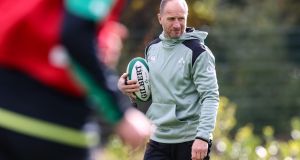 Ireland attack coach Mike Catt must feel like Elizabeth Taylor’s seventh husband. He knows what to do, he is just not sure he can make it stimulating or entertaining. Photograph: Billy Stickland/Inpho

At the Battle of Cannae on the Adriatic coast of Italy, in 216 BC, the legendary Carthaginian General Hannibal defeated the largest Roman army ever assembled.

At the illustrious military academies of Sandhurst and West Point, Hannibal’s tactics at Cannae are still taught as a towering example of strategic attack.

The commander in charge of the massive Roman army at Cannae was Gaius Terentius Varro. An impetuous leader, he arrogantly believed that his vastly superior numbers would simply overwhelm Hannibal’s army.

Hannibal’s plan was simple. He allowed the mass of compacted Roman soldiers to advance into the slowly retreating middle line of his defensive line. He then sent his cavalry around behind the Romans and outflanked them. Encircled, the slaughter of the packed Roman army was so vast that historians still argue over how many tens of thousands were butchered.

The problem is when you are attacking with the ball in hand and all you can see is a 14-man defensive line rushing at you, 'heads up rugby' gets you tackled behind the gain line

Varro had no real strategic plan. He was using “heads up” attack.

Fast forward 24 centuries and neither the Romans nor the Irish seem to have studied their history. The attack from the men in green for the last two years has been nothing short of horrid.

Mike Catt, the Ireland attack coach, must feel like Elizabeth Taylor’s seventh husband. He knows what to do, he is just not sure he can make it stimulating or entertaining.

Alarm bells began ringing in my head when at this week’s press conference the Ireland players started using that most annoying of terms “heads up attack”. This suggests that in attack they are just having a “bit of a lash”. Ask Verro how that goes.

It’s like saying, to play the flute you blow in one end, then move your fingers up and down over the holes. It’s just not that simple.

Press conferences are strange beasts and messages can get twisted, but Ireland appeared to be suggesting that, there is no strategic plan to break down the highly organised opposition’s defensive systems.

I am sure Shaun Edwards, the French defensive coach, who Ireland will face in Paris next week, will be reading this news with his face mask under his chin, sucking on a glowing Gitanes cigarette, sipping his espresso and asking his French teacher: “How do you say ‘silly muppets’ in French?”

The problem is when you are attacking with the ball in hand and all you can see is a 14-man defensive line rushing at you, “heads up rugby” gets you tackled behind the gain line. If we use that as a definition of “heads up rugby” then Ireland have been playing just that for 24 months.

The Irish attack needs a new innovative strategic plan to create space then attack that space. Once the strategic attacking plan breaks the first defensive line, then, by all means, play what you see, be where your feet are and play heads up rugby.

The other hope is that “heads up” could mean that Ireland are going to start to counterattack from kicks and turnovers. If that’s the case then I am all for it. But counterattack requires tactics. It is not helter-skelter. Everyone has a role to quickly move the ball to where there is space and then attack that area.

The other hope is that “heads up rugby” might mean an end to Conor Murray’s box kicks, but I doubt it.

The Italians have a similar problem. They have performed more passes than any team in the Six Nations but have scored only three tries. The fewest of any team. Having a superior number of passes does not equate to attacking success.

To quote Warren Ryan, the hard-nosed Australian Rugby League coach from the 1980s: “When you get the front door ajar, why jump through the window? Kick the front door in.” In more polite rugby parlance, you have to earn the right to go around a team, by first going through them. The Italians are trying to go around teams before they have gone through them and it does not work.

The Italians’ “hot potato” mentality of keeping the ball on the move fails because in rugby you pass the ball backwards and very few blue jerseys are going forward. It looks interesting but it does not deliver points.

To be fair to the Italians, they made several clean breaks against Scotland only to throw possession away on multiple occasions five metres from the Scottish try line.

Ultimately it has been the huge number of missed tackles and defensive system errors, especially from set play, that have seen the Italians haemorrhage points in game after game, season after season. In this prolonged championship, the Italians have let in 13 tries in only three games. That is the most in the Six Nations.

As Australia proved at Eden Park last weekend, in Test match rugby, failure comes with missed tackles. The Italian players must find a far more determined mind-set to their tackling than they have in recent years. I hope the Italians can provide serious opposition, so we have a real contest. In reality, with the greatest of respect to our Italian friends, Ireland should take this match with a bonus point.

The real challenge for Ireland awaits next week in Paris. Les Bleus, coached by Fabien Galthié and Edwards, will be Ireland’s biggest game since the World Cup. Today, Italy provide the perfect opposition for Ireland to prepare for the greater challenges that lie ahead.