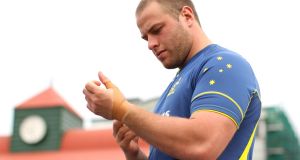 There has been an outpouring of support for Dan Palmer, the Australian former rugby union player, after he became the first Wallabies player and just the second men’s international to come out as gay.

In a powerful column published by the Sydney Morning Herald on Friday, Palmer revealed the struggles he faced throughout his career, during which he contemplated ending his life rather than have people discover his sexuality.

Palmer, a prop who played one Test for the Wallabies in 2012 and domestically for the Waratahs and Brumbies between 2008 and 2015, joins Welshman Gareth Thomas as the only other male professional rugby player to have come out.

Palmer, who hung up his playing boots in 2015 and is currently a PhD candidate at ANU, was widely lauded for his bravery. His former Brumbies teammate David Pocock led the plaudits, saying he was “one of the best men” he knew.

“I believe sport is at its best when it’s challenging society to be more inclusive,” Pocock said. “A good reminder of how much more work there is to do.”

Palmer detailed the mental health issues and drug problems he experienced when coming to terms with his sexuality, although he said he never felt discriminated against during his playing days.

But the long-running Israel Folau saga, which resulted in the winger’s sacking by Rugby Australia after he posted on social media that “hell awaits” gay people, was a contributing factor in his decision to write the column.

“Although it wasn’t the primary impetus for me doing this, the longer the Folau saga dragged on, the more I felt a responsibility to say something,” he wrote. “To me, what is more important than the damage he has caused rugby is the deep impact he has undoubtedly had on kids who looked up to him, and who struggle every day with understanding their sexuality.

“He will never see the impact he has had on these young people, but if he could, I doubt he could live with himself. Thankfully, from my experience in rugby, views like Israel’s are the exception, not the rule.”

Former Wales captain Thomas revealed he was gay in 2009, while still actively playing. Many others have done so in the women’s game, to far less fanfare.

Erik Denison, a researcher with Monash University’s School of Social Sciences, who has conducted studies examining homophobia and homophobic behaviour in rugby, said the similarities between the stories of Palmer and Thomas highlighted the lack of progress on the issue in sport environments.

“There has been a dramatic improvement in public attitudes towards gay people in general society, but we haven’t seen the same changes in sport where the constant use of homophobic language creates a culture where gay people feel unwelcome,” Denison said.

“I’m hopeful that people within the rugby community will recognise the similarity between the stories and understand the urgent need to address the culture that makes gay people feel unwelcome and that they have to hide their sexuality to be accepted in rugby.”

Much progress has been made by rugby union in recent years, including a formal agreement made between Rugby Australia and LGBTQ+ and inclusive teams to fight discrimination.

But with no openly gay active male players, Michael Smith of International Gay Rugby said there was far more work to be done to create sporting environments in which men felt comfortable to be themselves.

“Dan’s story was very hard for many of us to read because it reflects our experiences in sport,” Smith said. “Despite all the progress we’ve made around gay rights in society, gay athletes still feel like they need to hide their sexuality.

“Australian rugby, and the rugby teams which Dan played for, have been incredibly supportive of the need to address homophobia.

“Dan’s courageous decision to share his story highlights the work that needs to be done to make the game truly inclusive. We need to address the disconnect between everyone’s desire to be inclusive and the actual experiences of gay players.

“Most gay male athletes still feel they need to hide their sexuality.”