Ulster secondrow set for 10 weeks out with torn ligament 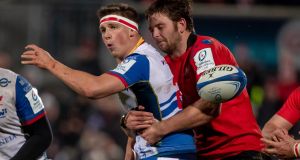 Ireland’s secondrow options had rarely looked so competitive as of late, but no sooner has this scenario come to pass than Iain Henderson has been ruled out for at least the start of Ireland’s Six Nations title defence and possible all of it.

Ulster issued a statement on Monday revealing that the in-form 26-year-old lock had undergone surgery “to repair a torn ligament in his thumb”, and added: “This is expected to make him unavailable for selection for approximately 10 weeks.”

Henderson seems likely to miss Ireland’s opening three Six Nations fixtures but could, possibly, be fit for selection for the games against France on March 10th and Wales on March 16th.

Henderson started the win over Argentina, played the last quarter of the win over the All Blacks and won his 42nd cap in the win over the USA, as the emergence of Tadhg Beirne and the huge performances of James Ryan and Devin Toner ensured the stocks of quality locks have rarely been so strong.

But akin to the midfield, where the presence of Bundee Aki, Garry Ringrose and, presuming he gets a run of games for Munster, Chris Farrell, Joe Schmidt and his coaches would not want any more damage in this area.

Henderson’s absence will be especially keenly felt by his province, for whom he has been a key man this season, not least in the upcoming programme of festive derbies and Ulster’s concluding Heineken Champions Cup pool games at home to Racing and away to Leicester.

He was outstanding in a Man of the Match performance in the first of the back to back bonus-point wins over the Scarlets last Friday week when, apparently, sustaining the thumb ligament injury.

Although he wore a brace over his thumb in last Friday’s win over the Scarlets at the Kingspan stadium, it didn’t seem to inconvenience him in the slightest as he engineered his trademark choke tackles, looked to rip the ball in contact, and carried strongly, even scoring two tries.

Ulster’s loss is all the greater as Alan O’Connor is currently sidelined while loan signing Ian Nagle is nearing fitness, and after playing off the bench against the Scarlets, Matthew Rea sustained a thumb fracture playing for Ballymena on Saturday and also had surgery on Monday. He is expected to be sidelined for eight to ten weeks.

All roads lead to Japan and presumably, of course, the decision to undergo surgery now is with one eye on the World Cup.