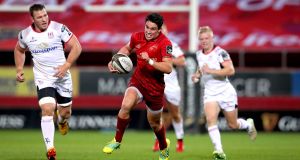 Munster outhalf Joey Carbery breaks free on his way to scoring a try during the Guinness Pro 14 game against Ulster at Thomond Park. Photograph: Ryan Byrne/Inpho

Munster will know better than anyone that sterner tests await, beginning with Leinster at the Aviva Stadium next Saturday and high-flying Exeter the following week. But this was an emphatic if decidedly low-key derby and ultimately facile victory for the home side at Thomond Park in front of a supposed attendance of 13,907.

Indeed, the record 64-7 win may have been satisfying for Munster, but it was far from that for the fixture or the Guinness Pro 14, and constituted Ulster’s record defeat, eclipsing their 56-3 defeat to Wasps in 1997.

Already missing the likes of Rory Best, Rob Herring, Wiehahn Herbst, Marty Moore, Jordi Murphy and Marcell Coetzee, this was all the truer after Iain Henderson departed for an HIA at the end of the first quarter and didn’t return.

By contrast Munster, who were led, in every sense, with steely eyed focus by Peter O’Mahony, appeared to come through relatively unscathed and with another run-out for most of their A-list players under their belts.

He was quick to the breakdown, box kicked well, tidy at the base and lively; one quarterback-type long quick throw that Tom Brady would have been proud of to Niall Scannell enabling the centre to find plenty of unoccupied grass downfield in the Ulster 22. He was also physical too.

Outside him, and operating off front-foot ball at home again, Joey’s Carbery’s running and passing game gave Munster plenty of width and the home crowd plenty to enjoy. As was the case a week ago, there were a couple more try-scoring assists as well as a second, flamboyant try in Munster red, a week out from possibly being re-acquainted with his former province.

That was one of nine tries registered in a third bonus-point win out of three at home this season as Munster moved up to third in Conference A. Only the ‘7’ conceded will have annoyed them. As one suspected might be the case after conceding four tries and a dozen linebreaks against Cardiff (two of them off first phase), as well as missing 20 tackles in total, it was clear from the off that the Munster would place a renewed emphasis on their defence.

Here they missed only 15, albeit there was no-one testing them with the footwork like Willis Halaholo.

Indeed, so under-powered were Ulster than Munster went into the game as 20-point favourites and any notions of this being a competitive contest were dispelled by a quick fire double whammy inside the first 10 minutes.

O’Mahony’s first clear turnover of the night led to Munster going wide around halfway, where Darren Cave blocked Dan Goggin’s grubber with his boot only for the ball to ricochet above the head of Andrew Conway. He gathered adroitly and had the presence of mind to release Alex Wootton, who broke one tackle and veered infield to draw the last man and put Goggin over.

Within four minutes Carbery cross kicked to Goggin, and worked hard to stay on his feet and keep the ball alive before, a ruck later, Mathewson went back to the blindside. There still seemed little on, until Tommy O’Donnell broke Cave’s tackle and galloped clear to score. Although the 31-year-old has had his injury woes of late, he still has plenty of gas.

Nor were Munster giving their visitors anything.

When Ulster went to the corner after Stephen Archer went off his feet, O’Mahony put the throw under pressure and Niall Scannell completed the steal. And although Gilroy countered off a sliced clearance infield by Carbery, another good Munster defensive set culminated in a fumble by Cave, who had a night to forget after previously being in vintage form.

When Jean Deysel won a turnover to end another Munster attack, O’Mahony promptly did the same and Henderson’s dissent brought the three-pointer comfortably within Carbery’s range to make it 17-0.

Although Ulster repelled one Munster lineout drive, when their scrum was mangled there was an inevitability about the outcome when O’Mahony informed Carbery to go back to the corner. From another Billy Holland take, this time the maul was set up better as several Ulster forwards drove beyond it, and O’Donnell spun around to score with O’Mahony latching on.

Munster might have had a bonus point by the 33rd minute, but Conway couldn’t hold the ball when charging onto Mathewson’s pass after Rory Scannell had followed up his own clearance off another turnover forced by the Munster defence to force a spillage from John Cooney. He accidentally re-opened the wound to Cooney’s scalp, and nor did the scrumhalf reappear. Not what Ulster needed.

No matter, another lineout in the corner led to more close-in rumbles by the forwards, whereupon Archer surprisingly shaped to plunge for the line only to pull the ball back for CJ Stander, and from the next recycle Munster had sufficiently bludgeoned Ulster to trust their backs for Goggin to score off Carbery’s pass.

Ulster were almost in as the clock turned red at the end of the first half, but it said everything about Munster’s hunger in defence that Mathewson completed the try-saving tackle on Angus Kernohan and Niall Scannell was quickly over the ball to close out the attack.

However, within six minutes of the resumption, Ulster generated quick ball through the phases, Kernohan and Billy Burns switching the point of attack, for Cave to break Carbery’s tackle to score.

Munster’s response betrayed their irritation. One sweet strike move off the training ground, with Carbery pulling the ball back as Earls came round from his wing and Conway fed Wootton, who was denied by a superb covering tackle by the 20-year-old debutant Michael Lowry. No matter, a couple of phases later Carbery was putting O’Mahony over in the corner with a sumptuous left to right skip pass, and he tagged on the touchline conversion.

That was most definitely that. Another strong Munster defensive set and turnover led to them transitioning and sweeping the ball from right to left, where Conway released Wootton. His lobbed pass inside was about to be gathered by Duncan Williams, but instead Carbery – lethal in open play– steamed onto the ball, plucked it one-handed, veered around Lowry to score untouched from 50 metres.

Carbery converted and departed soon after to a standing ovation, before further tries followed in a freewheeling endgame for Sam Arnold, Earls and Wootton.