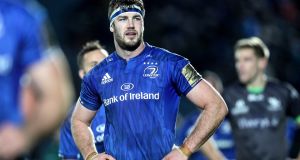 Form is irrelevant. In theory here follows nothing more than a pre-season affair – the first day back in an empty stadium – that just happens to include the strongest teams Johann van Graan and Leo Cullen can muster.

Every single player has something very real to play for.

Leinster prop Tadhg Furlong misses out with a back issue while Jordan Larmour is preferred to Rob Kearney at fullback.

For Munster Jack O’Donoghue is ruled out with concussion but Van Graan did state a “few of the guys in isolation were very close to getting into the team”. The single Covid-19 positive by an academy player means his close contacts are temporarily out of the picture.

Still, Munster fans would be hard pressed to name a stronger panel with Dave Kilcoyne, Jean Kleyn and particularly Craig Casey giving them a “finishers” – to borrow Eddie Jones’s favourite phrase – look off the bench.

The Leinster backrow captures the eye as Cullen and Robin McBryde decide to facilitate Jack Conan’s return from injury – a broken foot sustained in Japan last year – in his natural number eight slot, so Caelan Doris shifts to the blindside flank.

Josh van der Flier remains at openside but Leinster are trialling a six forwards and two backs split in their reserves, with Max Deegan covering centre, en vogue since South Africa launched RG Snyman and the “bomb squad” during the World Cup.

“Normally in a pre-season scenario you get to change most of your team at half-time,” Cullen explained. “We don’t get that luxury during this game.

“South Africa won the World Cup with a six-two split and England went with it during the Six Nations which was interesting as well. It’s just something we want to look at.

“We think there is the potential to be a big, physical toll in the game,” Cullen added.

Will Connors is the extra loose forward but Dan Leavy is “very, very close” to a return, perhaps against Ulster next weekend.

There are multiple subplots but how Robbie Henshaw and Garry Ringrose repel the power surge promised from bigger men, Chris Farrell and Damian de Allende – who will run straight and often at Johnny Sexton – would be worth the price of admission alone.

This fixture is always a potential nightmare for the referee and Andrew Brace has the added heat of explaining stricter rules at the breakdown and offside line.

“The arriving tackler assist or poaching player, he’s getting a little more joy now, because he’s been rewarded so he’s not being managed off the ball by the referee,” Cullen explained some more. “What does that mean? Well, it means for the team in possession, they need to make sure they’re into that ruck space nice and early so they can deal with that player, and obviously they’re arriving through the gate and legal.

“I think we have a reasonable understanding but sometimes it’s on the day with the referees. It’s certainly been explained to us plenty of times, so it should be clear in our minds.”

Boys will be boys, so expect a few early whistles from Brace to avert an avalanche of penalties and strife.

Everyone looking on wants strife. It’s been too long. Leinster to prevail working off muscle memory and Sexton’s boot as much as anything else.